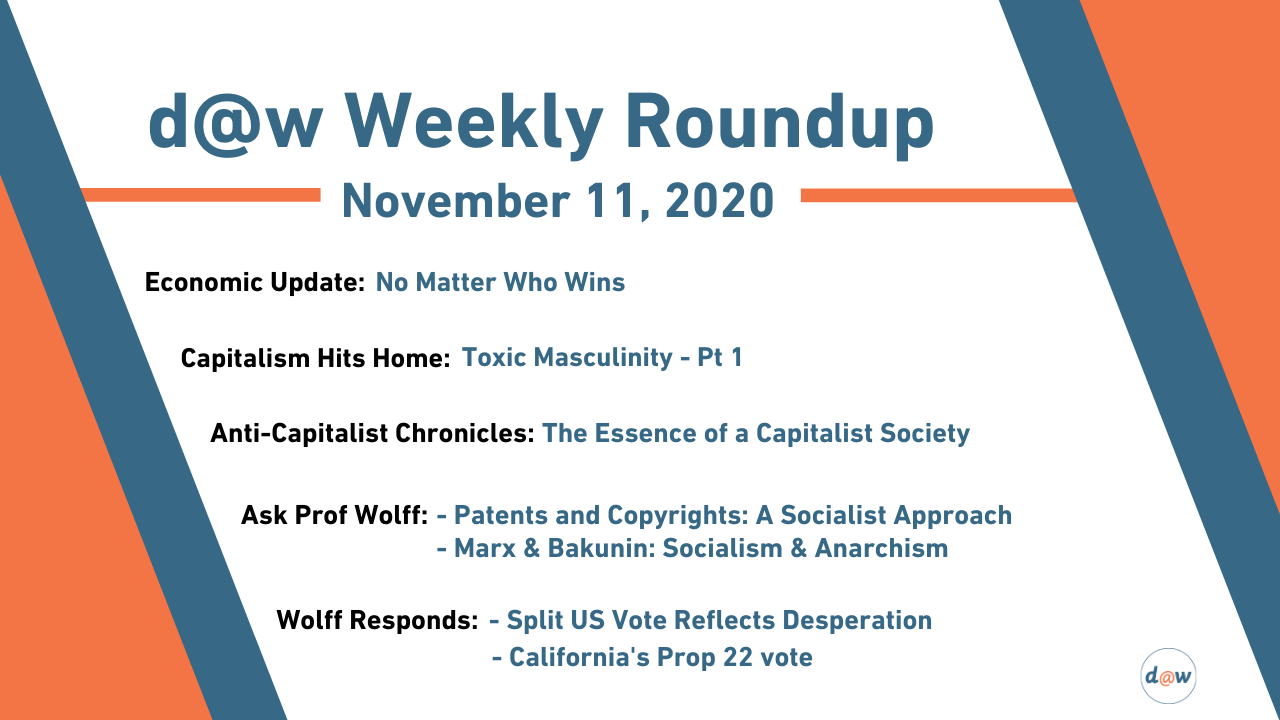 Economic Update: No Matter Who Wins

On this week’s show, Prof. Wolff presents the following short updates: Inspire Brands buys Dunkin Donuts, as big firms grow while medium and small firms die; private US capitalism is now on "life-support" financial dependence on US gov't; and pre-Covid US eviction tsunami is now getting worse fast. No matter who wins, the capitalist system gets continued support, continued failure to end instability, continued erosion of the New Deal, and continued denial of real political choice in the US.
Wolff: “We're supposed to have freedom of choice. But what it really means in practice is the desire to be able to go into your neighborhood drug store and choose freely among 27 different kinds of toothpaste... When it comes to politics, two is the magic number in our society. Only two... We don't allow two companies to monopolize an industry without raising a question but we allow the two parties to manipulate and monopolize from here to tomorrow. You don't have any choice and these two political parties work very well together to keep it that way."

On this part 1 of 2, Dr. Fraad and Julianna Forlano discuss toxic masculinity and how the social and economic conditions of its existence have transformed. Testosterone fueled aggression and heft are no longer needed or wanted in the workplace or at home. Force comes in when equality and democracy threaten old privilege.
Julianna: “Toxic masculinity can actually be internalized and then played out by women as well. So it's more of an ideology than it [has] to do with the gender that you are in."
Harriet: “There are a lot of forces that fuel these toxic masculinist views which are economically outmoded, socially outmoded, and frankly pathetic."

Anti-Capitalist Chronicles: The Essence of a Capitalist Society

On this episode Prof. Harvey argues that the transformation of the productive forces under capitalism requires major adjustments in thinking. He believes that much can be learned from China and repurposed to gain a much more sophisticated understanding of how to manage capital in its dying days and work towards the creation of a communist future.
Harvey: “In what ways must we think of transition to an anti-capitalist society as a transformation in humanity's own nature?... If we're going to change human nature, we're going to have to change daily life."

A Patron of Economic Update asks: "What is the role of patents and copyrights in a socialist society based on worker coop enterprises? These government granted monopolies are the main causes of income distribution to the few who can fund or buy research that gets patented or receive copyrights. How do independent artists, researchers, inventors get funded and recognized in a socialist society. I know that in the Netherlands that the government purchases artworks and rents them to companies and individuals. What is an ideal method of giving incentive to creative people, financially, socially, and economically."
Wolff: “Clearly what we want is to get the benefit for everybody of all the innovations and pretty much as quickly as they're developed that's the way we maximize the social benefit of individuals coming through with breakthroughs in what they produce. And indeed since those individuals have been educated, raised and developed by the larger community then in a way it's payback and a socialist society would be committed to that.”

A Patron of Economic Update asks: "I’ve just learned the Prof. Crispin Sartwell intends to publish a book, based on Bakunin, that argues that Marx was an authoritarian who wanted an all-powerful state. This is clearly a misunderstanding of Marx, as SFSU Prof. Ann Robertson pointed out in a 2003 essay on the fundamental philosophical differences between Marx and Bakunin. I would appreciate it if Prof. Wolff could address this charge by Bakunin that Marx was an authoritarian."
Wolff: “Both Marxism and anarchism have a deep long-lasting commitment to socialism as the name of the next system we can build on the basis of capitalism and yet break from capitalism to something that's better… Marx's notion of the state as existing in a transitional period was not an endorsement of the state or a thought that the state should exist within socialism but should be a tool, a way for the working class to have more power to make the transition from capitalism to socialism. This was anathema to Bakunin who wanted a direct and pretty much immediate assault on the state to get rid of it… So that has remained part of the opposition that is often found alongside the alliance between anarchists and Marxists… Marxist and anarchists, socialists and anarchists, have much more in common than divides them. There ought to be and there often has been practical collaborations, alliances, coalitions between them… The way the system works now, of course, also has a terrible cost that I need to mention. You are skewing invention by profit you are leading inventive minds to go to where they think the profit is and that is not the same as going where the need is.”

In this Wolff Responds, Prof. Wolff gives his thoughts on election 2020. The split vote between Biden and Trump is indicative of how desperate Americans are. The reality of a collapsing US capitalist system shows that Americans understand the predicament they are in and the realities of a broken economic and political system, but remain hopeful that the 2 monopolizing parties will find a way to make things better.
Wolff: “These two candidates, not surprisingly, are offering pretty much the same thing to the desperate people facing a collapsing us capitalism. Each of them offers a return to something better: the good old days for Trump when we were great again. And for Biden, the good old days are the normal kind of politics of gentlemen's agreements between the establishment of the Republicans and the establishment of the Democrats… But the problem is, you know how we got to where we are now? By going through what we went through before going back doesn't solve anything.”

In this Wolff Responds, Prof. Wolff talks about California's Proposition 22 voted on this November  and how it reflects ugly profiteering by companies like Uber, Lyft, etc.
Wolff: “It's going to allow these companies to get an exemption that is they don't have to consider their workers as employees they can consider them as independent contractors in what has widely become known as the ‘gig economy...’ For the last 150 years here in the United States working men and women have struggled to get certain basic protections for themselves as workers… But no comparable body of law exists to protect one contractor who enters into a contract with another; they're not considered workers so they don't get covered by all those protections. It has nothing to do with technology it has nothing to do with convenience… The reason you want exemption from treating your employees as employees is because it saves the company's money. That's it… the companies will make profit for so long as we the public and the drivers do not respond to the suffering and the losses that this hustle involves.”