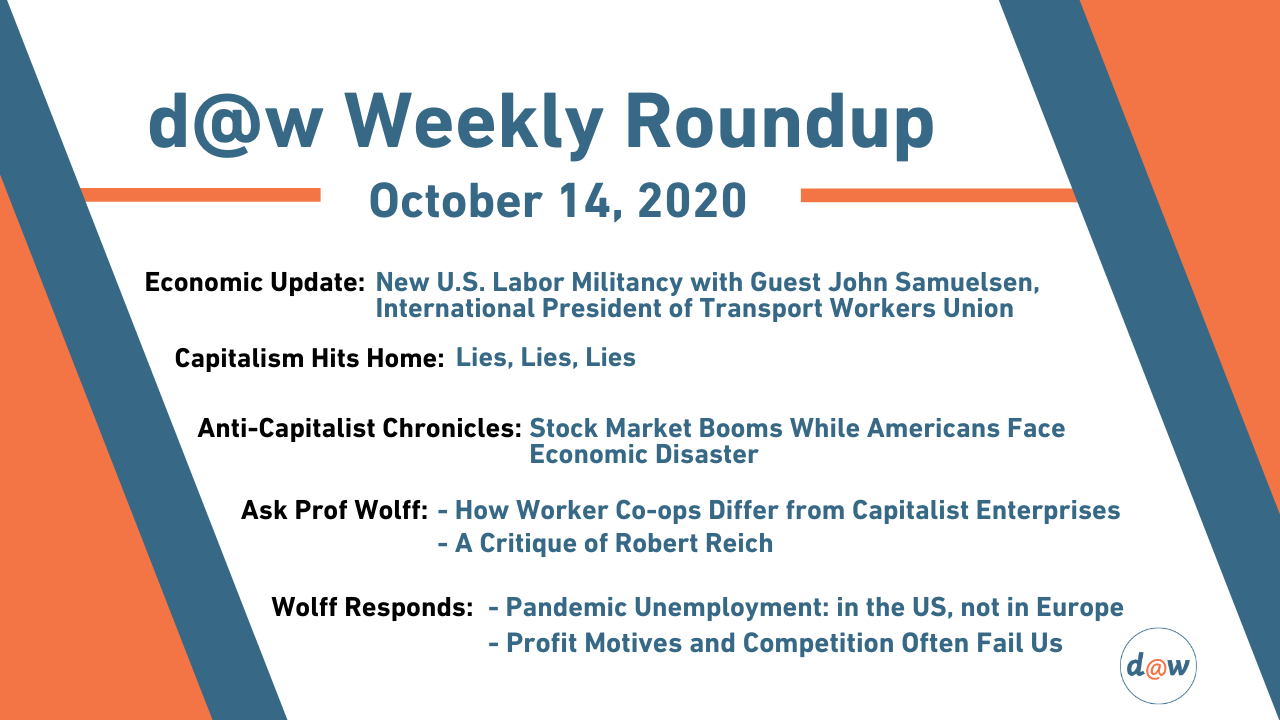 On this week's show, Prof. Wolff talks about the Geneva, Switzerland vote that's raising the minimum wage to $25.16/hour or over $50k/year; GOP block federal aid to cities and states; economics of police brutality; 20th vs 21st century depressions; and lastly, how profit motivates capitalists to market fake, toxic hand sanitizers. On the second half of the program, Wolff interviews John Samuelsen, International President of Transport Workers Union (TWU) in the US.
"Wolff: The 20th century in the United States, and elsewhere, was shaped by the Great Depression of the 1930s. First by the convulsion, then by the left wing response to it, and then by the right wing undoing it. We're gonna have the same this century. We're in the first step: the convulsion. And we're already well through the lurch to the right, not the left, this time."
...
"Samuelsen: Covid-19 has raised an awareness among working people that a collective approach to the bosses is necessary to save lives... They're not going to let the bosses kill them, and this pandemic has had a lot to do with it...  And isn't that the  shame of it, that the Republicans in the United States would call the Europeans "socialist" and meanwhile these socialists in Europe did so much more to support businesses and families."

The psychotic level of misinformation and untruth coming from the Trump administration, and from capitalism itself, is creating chaos in our outer world and our inner psyches. This week's discussion centers around one of the biggest lies we are told as children and how to deal with life when you don't know what is real.
“Harriet: Americans, of course, are always subjected to lies. Every ad that you see, whether on the internet, or on television, or even before the movie that you paid for (when you could go to the movies)is a lie. "The best, the fastest, the most secure," whatever they say, you know that they're probably lying to enhance their own profit. QAnon gets away with telling outrageous lies.”

On this episode of David Harvey's Anti-Capitalist Chronicles, Prof. Harvey talks about the economic uncertainty Americans are experiencing: job loss, indebtedness, inflation. The stock market is flourishing, but only the top 10-20% of the US population have investments and are benefitting from the boom. The majority of Americans are left with little to no support and very little access to food and basic services. Harvey predicts the situation will worsen in the next few months. Washington's political gridlock means no real change can be expected.
“Harvey: And that it seems to me is the big, big problem right now, that we have a political tradition which over the last 10, 15, 20 years has been about the production of economic and political gridlock in Washington. So nothing can get seriously changed, and nothing can get done. Because that allows the corporations to do exactly what they want.”

A Patron of Economic Update asks: "If the end goal of Marxist socialism is to abolish the commodity form and make all value inherently social, how would this be achieved without changing the mode of distribution?"
"Wolff: Capitalists arranged for markets to work in just the way that reinforces capitalism. And worker co-ops will also regulate and shape markets so that they reproduce worker co-ops. There's not a problem in doing that. That's the history of economic systems.”

AskProfWolff: A Critique of Robert Reich

A Patron of Economic Update asks: "Hello Prof Wolff. I watched the Netflix film "Saving Capitalism" based on Robert Reich's book and would like to hear your opinion about his view that laissez-faire and "crony capitalism" is the real problem, not capitalism itself."
"Wolff: Robert Reich, like many other liberal, or left liberal thinkers in America and beyond wants to save capitalism because he believes the kind of capitalism we have is misguided, unfortunate, wrong-headed but changeable… Fixing capitalism isn't enough. Even if you struggle long and hard, and even if you win, the system leaves the power and the profits in the hands of the capitalists who use their position and use those profits to undo whatever fix it the mass of people has been able to achieve…”

Wolff Responds: Pandemic Unemployment: in the US, not in Europe

In this Wolff Responds, Prof. Wolff compares the responses by European countries to COVID-19 to that of the U.S. He argues that the long history of Socialism in Europe paved the way for solutions to the pandemic.
"Wolff: The conservatives in Europe dare not do what the American economy did to the working class because they know if they fired all those workers [the workers] wouldn't go home to their apartments and sit there. They'd be in the street and the economy would shut down way more thoroughly than any pandemic could have achieved. There would be a revolution in the streets because the working class in Europe, after decades of socialist influence, is not about to absorb the lion's share of a pandemic they are not responsible for. They're not going to allow those at the top to do whatever they want while the mass of people are shuffling off to the unemployment office. None of that. That's an American exceptionalism.”

In this Wolff Responds, Prof. Wolff provides recent and not so recent examples of how the profit motive and competition often lead to bad, at times even deadly results. He lists examples of toxic hand sanitizers, VW gas emissions scandal, cigarette manufacturers, and more.
"Wolff: For every example of where profit driven behavior leads to a good outcome, I will show you where profit driven behavior leads to an awful outcome. The profit motive is a motive with at best mixed results. That people should imagine that it's some magical guide to pure, wonderful, goodness, growth, and prosperity is simply wrong-headed; it's a confused ideological position that does not bear any scrutiny at all.”