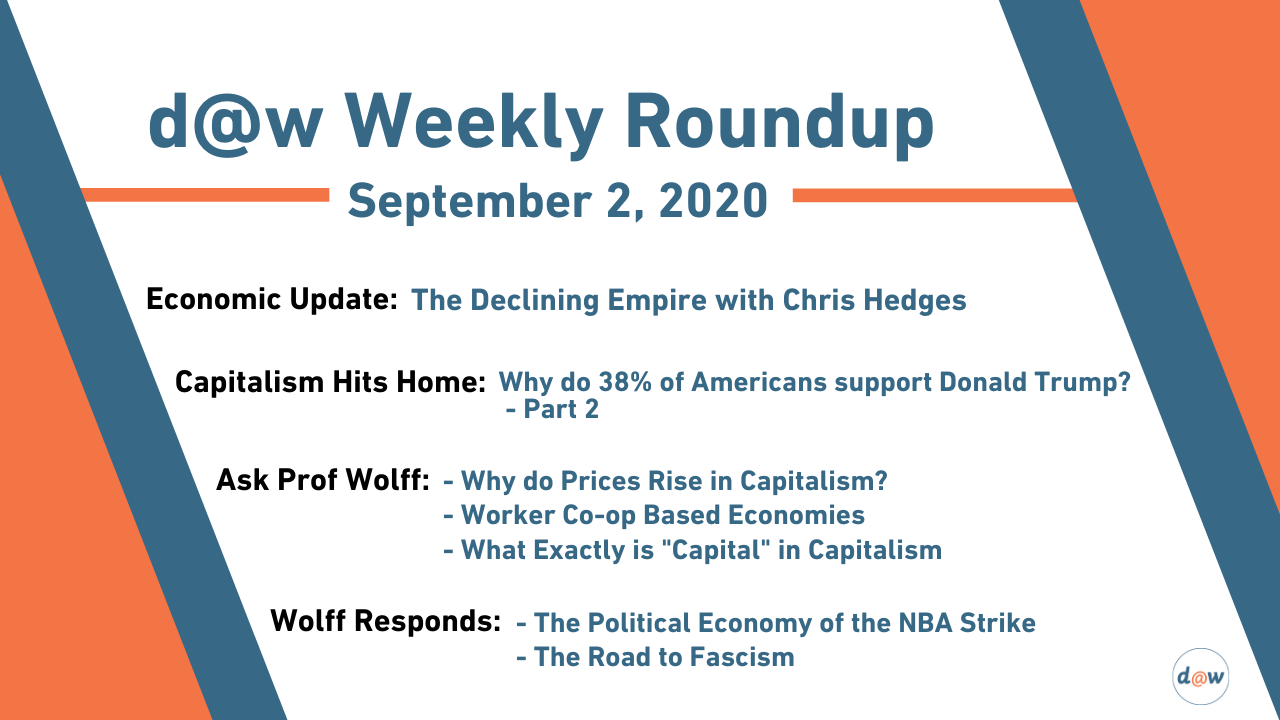 The latest Economic Update welcomes guest Chris Hedges’ insights into the signs and attributes of a declining US empire, as well as the signs of hope.

Dr Fraad continues to analyze the psychological undercurrents to the support of Donald Trump in the latest episode of Capitalism Hits Home.

In two Wolff Responds this week, Prof Wolff addresses the impacts of the athletes strike that began in the NBA last week, and what he feels are the signs of fascism in the United States.

Economic Update: The Declining Empire With Chris Hedges
"And so [the Democrats] anointed Joe Biden because Joe Biden serves their interests in the same way Trump does. In that sense the political and economic system is completely fixed... [But] there's a sophistication [in the ongoing protests]... The kind of gaslighting by the elite, and in particular by the Democratic Party, isn't working... And I think there is an understanding, in my sense, of those who are leading these movements, that they grasp that these are systemic problems that have to be addressed."
- Chris Hedges in conversation with Richard Wolff

AskProfWolff: Why do Prices Rise in Capitalism?
“So what you have at any moment is in a sense two processes going on; of fall in prices coming from the sectors that remain competitive, or are just starting out as competitive versus those that have become oligopolized or monopolized, where the prices are going up. And what you see is the net effect on the price level of those two. The more developed the economy, the more mature the economy, the bigger the role of the monopolist.”

AskProfWolff: Worker Co-op Based Economies
“Banks, the market... those are institutions that were developed in particular ways to handle the problems of growth in capitalism. Similar institutions, or altogether new ones, will evolve and develop to manage and handle the adjustments and the growing pain of a worker co-op based economy.”

AskProfWolff: What Exactly is "Capital" in Capitalism
“In my eagerness to stress what's so often overlooked that employer/employee relationship I sometimes neglect to remind everyone that another part of capitalism, the part designated by that word, “capital.” What is capital? Marx's definition is as good as any: self-expanding value… Workers produce more value when they work then it costs the employer to bring them there, and that's capitalism, including the important capital wealth growth part alongside the employer/employee relationship.”

Wolff Responds: The Political Economy of the NBA Strike
“This is extraordinary. These leading athletes were not striking with holding their labor (a classic labor movement activity) to get higher wages. They weren't doing it to get better working conditions. They were doing it to change society. They had a political objective and they didn't hide it and they didn't deny it... Bravo. Change is coming and they're showing one major way to do it.”

Wolff Responds: The Road to Fascism
“When the capitalists of this world depend as totally as they do now on the government for the credit which keeps the system going, the politicians (the credit distributors) will demand and get from the capitalists the kind of accommodation, adjustment, subordination that begins to merge government and capitalists into a joint venture. And that joint venture is the survival of capitalism, the survival of a small group of people at the top… But in fascism the difference is that the lines between government and the private capitalist get blurred. Eventually they get erased and what we have is a military industrial governmental complex, all one big machine of a tiny minority of folks at the top telling us all what to do… Fascism always was a solution to keeping capitalism going when it had produced so many enemies, so many shortcomings, so many catastrophes, that its survival was at stake. That's happening now.”

Learn more about Prof Wolff's latest book, The System is the Sickness: When Capitalism Fails to Save Us from Pandemics or Itself, that is coming out in a few weeks: www.democracyatwork.info/books