“It was a revelation to me. It was awesome. It has been about 10 years since that kind of grand shift in my whole political strategy and I'm very happy to have found this area of political work.”

In this special anniversary episode, the ATC guys discuss their own political histories and perspectives, their path to becoming co-hosts of this podcast, and their goals for the show. As Larry said, “[On All Things Co-op], we link experiences in everyday life that have social implications, that are negative but need to be resolved, to how democratic work relations [can be] a path to resolving them.”

Sharing his introduction story to Richard Wolff through Occupy Wall Street, Cinar credited the movement for reviving a class-based political analysis in mainstream discourse, which helped the message about our workplaces resonate stronger than before.

“Democracy at Work itself as a group has been really, I think, influential in furthering this conversation about what we mean by 21st century socialism: a socialism based on worker cooperatives and a political system that kind of reinforces that and recreates it. I think that's been very compelling."

For many, realizing that they don’t have democracy in the workplace, where they spend the majority of their waking hours, has been a “light bulb” moment, and opens up interest in alternative ways of structuring our society. Almost a decade ago, Kevin said that he was still frequently explaining to people what a worker co-operative was, and now that is much less common. The ATC guys and all the rest of us at Democracy at Work are proud of the part that we’ve played in that widespread education.

"We provide the argument, the examples, the perspective that is able to fight against the nihilists, the fascists, the fatalists. And that we arm those that are on the right side of history with the means to be able to say, ‘This is what the future could look like, should look like, and this is how we can get there.’"

And as always, we’re grateful to have such an active, engaged audience with us. Join us in this effort by sharing our work or learning about the many ways you can donate to [email protected] Whatever way you support us, thank you for partnering with us. 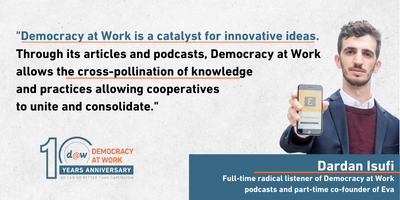 Hear what Dardan Isufi, co-founder of Eva Cooperative, has to say about what we have accomplished in our first 10 years…

"Democracy at Work is to the cooperative movement what Solidaridad Obrera was to the labor movement in Spain, a catalyst for innovative ideas. Through its articles and podcasts, Democracy at Work allows the cross-pollination of knowledge and practices allowing cooperatives to unite and consolidate."

Hear more from others on our 10 Year Anniversary Page!