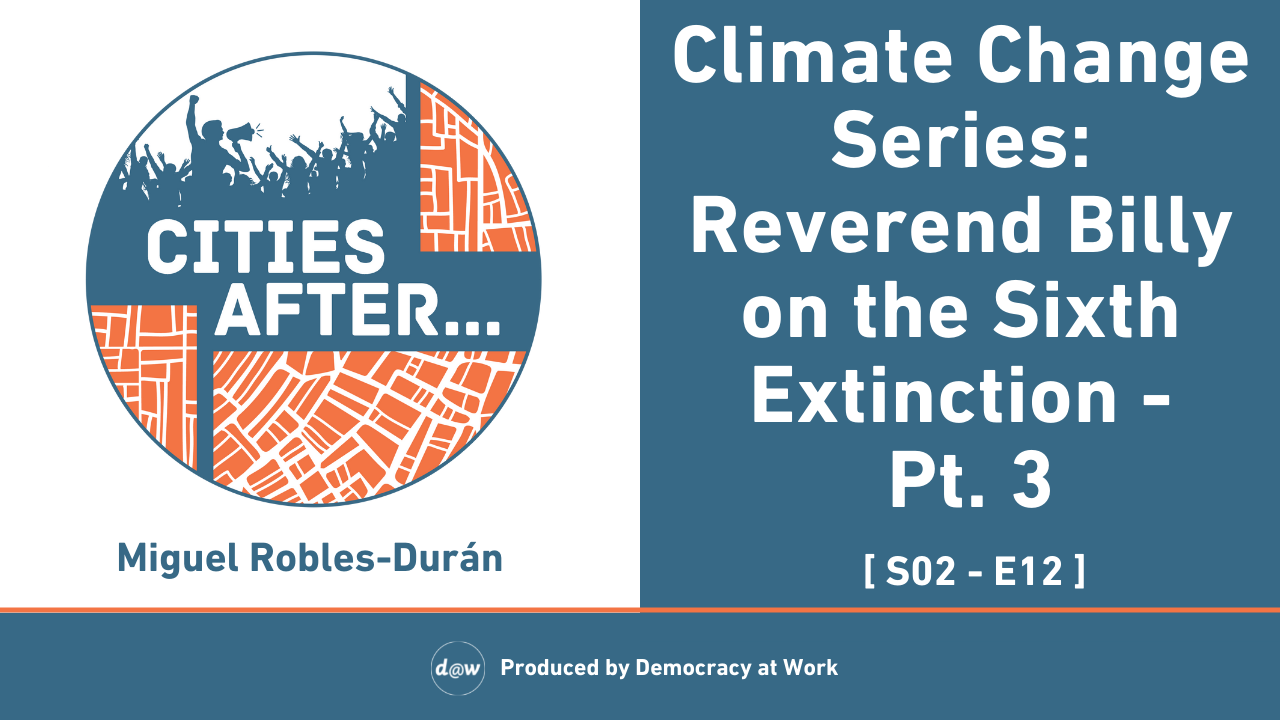 Continuing with Pt. 3 of Cities After…Summer Climate Change series, Prof. Robles-Durán talks to the world-renowned performance artist and activist William Tallen, famously known for his character Reverend Billy, described in a recent National Public Radio article as a Veteran anti-consumerist crusader taking aim at capitalism and climate change. Tallen and Robles-Durán discuss the destruction of NYC’s East River Park, the inseparable connection between art and the environment, the Sixth Extinction, greenwashing, and more.

**Cities After…will be taking a short hiatus. We’ll be back with new episodes in September!**

About our guest: William Tallen began performing as Reverend Billy on the sidewalk at Times Square in 1998 outside the Disney Store, where he proclaimed Mickey Mouse to be the anti-Christ, duct-taping Mickey Mouse to a cross. Reverend Billy's early sermons decried the evils of consumerism and the racism of sweatshop labor and what Talen saw as the loss of neighborhood spirit in Rudolph Giuliani's New York.

According to William Tallen, the Reverend Billy character isn't so much a parody of a preacher as a preacher motif used to blur the lines between performance and religious experience. "It's definitely a church service," Talen explained to Alternet, but, he added, it's "a political rally, it's theater, it's all three, it's none of them." Alisa Solomon, the theater critic at the Village Voice said of Reverend Billy's persona, "The collar is fake, the calling is real." Along with the Church of Stop Shopping, a project directed by his life partner Savitri D, they have been referred to by academics as "performance activism," "carnivalesque protest," and "commercial disobedience."

In addition to protest performances throughout a given year, Reverend Billy and the Church of Stop Shopping have organized various campaigns focused on consumerist and environmental issues, often highlighting a particular company they feel best symbolizes the issue. The group stages actions in public spaces near the targets of their actions, often in the lobbies, halls, and plazas in buildings owned by the companies they protest.

Since April 2020, Reverend Billy and Savitri D, have been hosting the EARTH RIOT podcast, which they describe as a comedy-infused, music-filled exploration of humanity’s most urgent issue—the planet’s Sixth Extinction. Made by "Earth-loving urban activists" from The Church of Stop Shopping, their podcast educates, inspires, and urges listeners to embrace reality and take action.


Cities After... is a Democracy At Work production. We make it a point to provide the show free of ads. Please consider supporting our work. Learn about all the ways to support our work on our Donate page. Every donation counts! A special thank you to our devoted monthly donors (via both our website and Patreon) whose recurring contributions enable us to plan for the future.
We are committed to providing these podcasts to you free of ads. Help us keep this show sustainable by supporting Cities After... via the links below.
SUBSCRIBE: Apple Podcasts | Google Podcasts
SUPPORT: Donate | Patreon