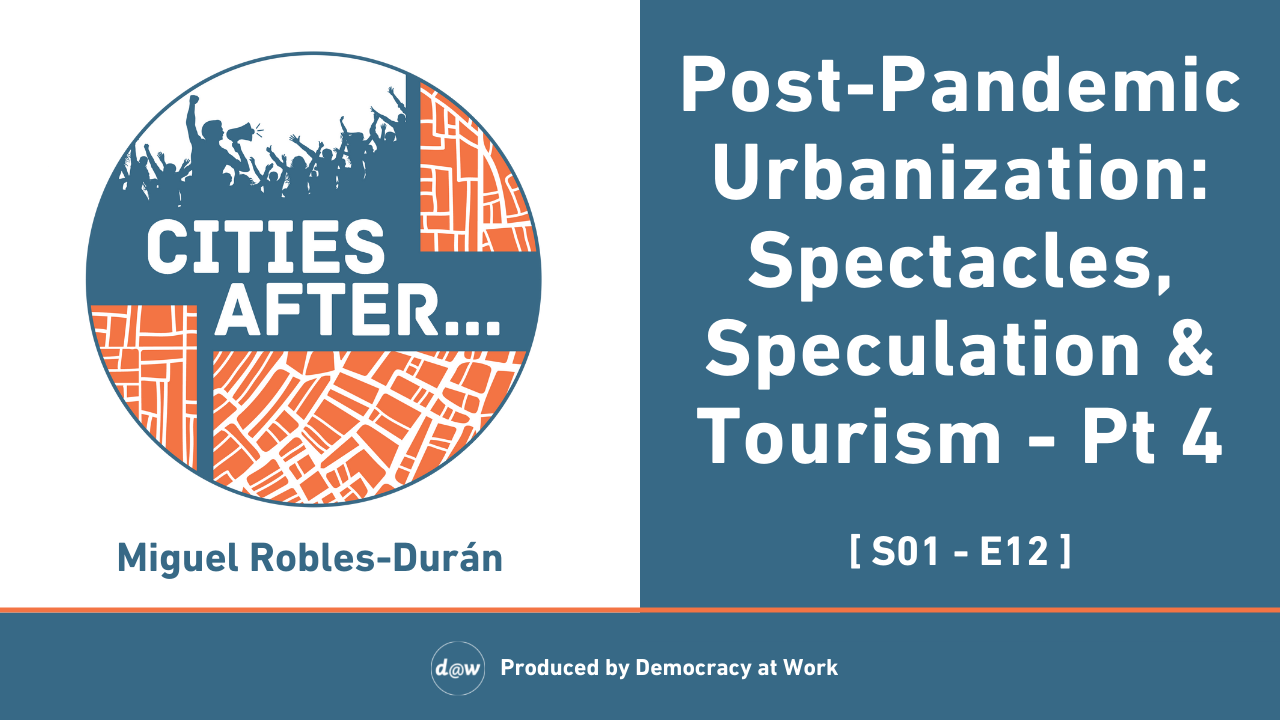 In this episode, Prof. Robles-Duran continues to discuss the social, spatial and environmental effects of mass tourism by focusing on Barcelona, one of the worlds top tourist destinations and the first major city that developed important strategic policy to fight the predatory global tourism industry. For this discussion, he is joined by two very important personalities from Barcelona’s municipal government and urban social movements alike.

Cities After... is a Democracy At Work  production. Launched in May of 2021, it is a bi-monthly podcast about the future of cities; grounded in our daily urban struggles, it is part dystopian and part utopian. The intention is to entice civic imagination into action, because a more just and sustainable urban future is possible. A new episode is released every other Tuesday at 4pm EST.
We are committed to providing these podcasts to you free of ads. Help us keep this show sustainable by supporting Cities After... via the links below.
SUBSCRIBE: Apple Podcasts | Google Podcasts
SUPPORT: Become a monthly donor
LEARN MORE about this new podcast: Cities After... hosted by Miguel Robles-Duran

About our guests: Gala Pin is the former governor of the city of Barcelona and chancellor in the first legislature of “Barcelona in Comú” in charge of citizen participation and the district of Ciutat Vella. Since 2012 Gala has actively participated in various struggles for the right to the city, from neighborhood movements to the national Plataforma de Afectados por la Hipoteca (PAH), roughly translated as the platform for the affected by mortgages. Her militancy includes the defense of rights and freedom in the digital era and the promotion of the 15M movement in the Spanish State. She has worked in the implementation of mechanisms for direct democracy with technopolitical elements, the promotion of urban planning focused on the right to the city, the defense of Heritage, the inclusion of intercultural perspectives and has done substantial work to curb tourism monoculture.

David Bravo, former advisor to the Mayor of Barcelona on the implementation of strategies against gentrification. David is an architect dedicated to reflection and debate on urban challenges such as public space, the right to housing, fair and sustainable mobility and the right to the city. He is the director of contents of the European Prize for Urban Public Space, of which he is also secretary of the Jury. David was recently commissioned the curatorial development of "Piso Piloto" an exhibition on the right to housing in the Centre of Contemporary Culture of Barcelona, he also recently directed the documentary "Europe City," on the European city model for the Spanish public television (RTVE).