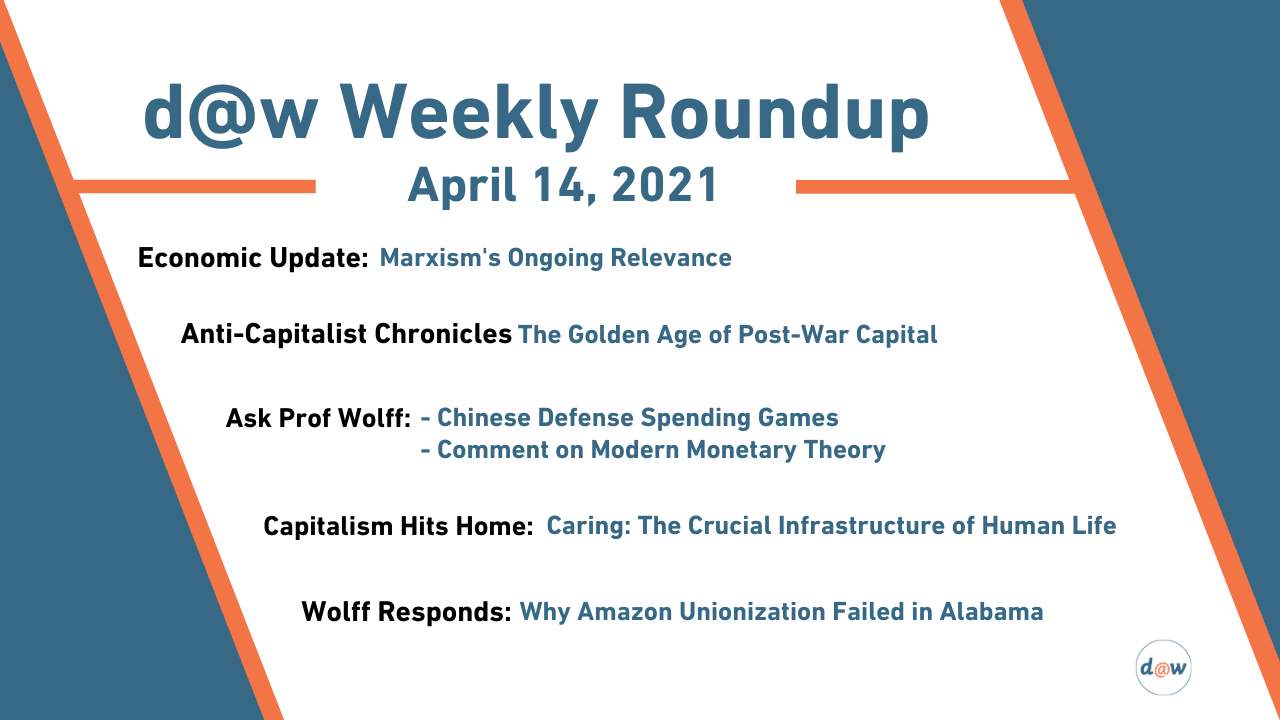 After clearing away the Cold War debris that blocked discussion of Marxism's insights since 1945, we focus on Marxism's core contribution to (1) thinking about and (2) changing modern capitalist society. That contribution is class structure and class struggle. Marxism explores how class struggle exists in capitalism, how it influences all of social life, and how it changes over time. Marxism also envisions the end of class struggles as its social change goal now.

WOLFF: “What Marx is about has very little to do with the government. It's not about the government coming in and doing this or doing that. It's not about the government taking over, it's not about taking away your liberty, it has nothing to do with those things. Those are smears, caricatures, designed to turn people away to demonize Marxism so it's not available to learn from Marx's insight about the class differences in society, the class struggles that shape our society. They're powerful. They're useful. Are they all 100 percent right? Of course not. Do we have to develop, and change, and adjust them to our circumstances? Yes, of course, this isn't a religion.”

HARVEY: "Immigration was seen by the corporations as one of the key means by which you could undermine working-class power. And therefore there was a broad support amongst the corporate capital... But the anti-immigrant politics these days is always thought of as a cultural question, whereas back then it clearly had its roots, clearly had its roots, as a labor question."

A patron of Economic Update asks: "My question is, how useful is the idea of Purchasing Power Parity in regards to comparing how much money two countries (US and China) spend on their militaries.”

WOLFF: “It is important to understand that the bashing of Mr. Putin in Russia, the bashing of the Chinese, a plaything, a pastime, for leaders of both the Republican and Democratic parties, is exactly the same non-serious rhetorical politics that the military chiefs doing real wonderful moves on Chinese statistics, in order to justify the rising military budget or to justify distracting the American people from the real problems they face at home, by focusing them on threats exaggerated abroad.”

A patron of Economic Update asks:"What is the Marxist take on Modern Monetary Theory?"

WOLFF: “It's an important way of understanding that the creation of money is not limited, constrained or controlled in the way the tradition implied was necessarily the case. Modern monetary theory shows it isn't necessarily the case and in that way it is a critical transformation of our understanding of how money works and as everyone knows in a capitalist system money makes the world.”

This is a clip from the March 2021 Global Capitalism lecture by Richard D. Wolff in which he comments on the fact that factories are fully equipped yet doing nothing because they cannot access the patents to the Covid-19 vaccines.

Wolff: "Even if patents for other things were maintained (and there's a big debate about whether that's reasonable too) we clearly have a national planetary emergency here. And there's something profound in a global capitalist system that is protecting the profits of a small number of companies around the world, particularly American, at the price of death and illness all over the world." - Richard Wolff

In this Wolff Responds, Prof. Wolff explains why Amazon workers in Alabama voted against unionization, and compares the American labor movement to that of Europe. Wolff draws from European examples to underscore what is needed for unions in the US to gain momentum.

Wolff: ““Rebuild the alliance that corporate America smashed an alliance between a labor movement that needs all the help it can get and an already rapidly growing progressive leftist sometimes socialist mass movement.”