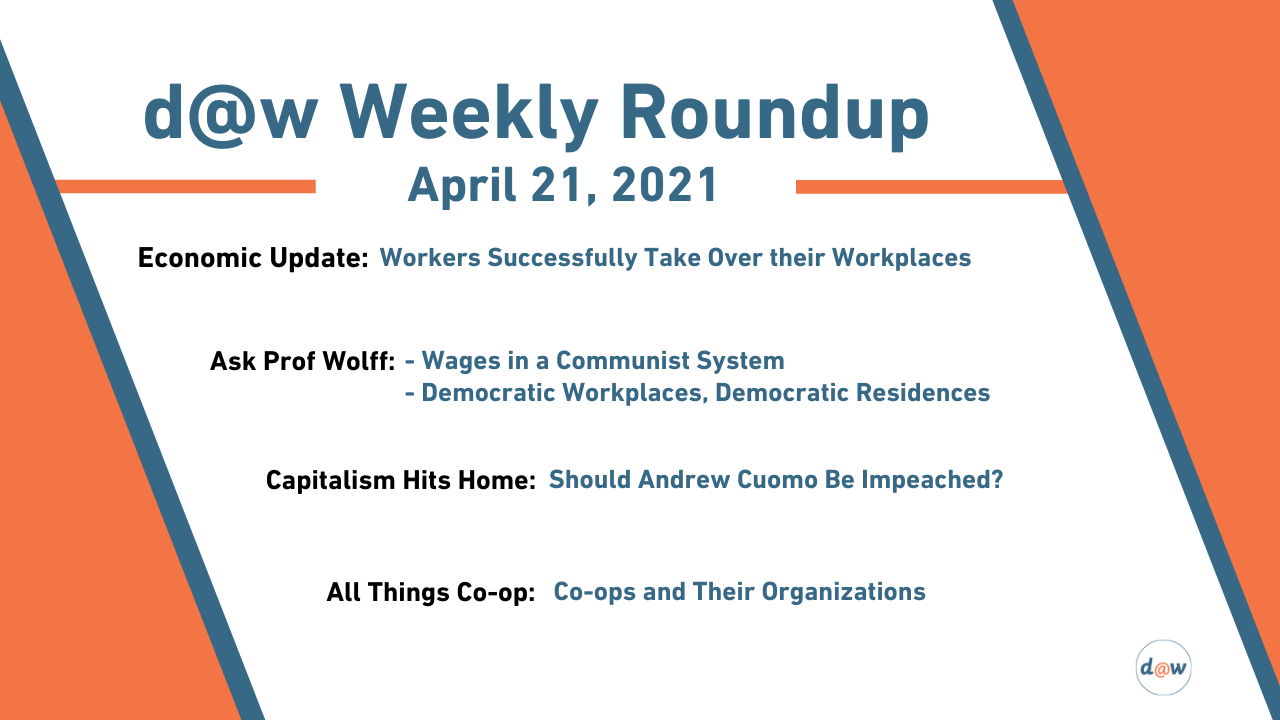 On this week's show, Prof. Wolff discusses how the US home rental market is failing over 20% of all renters, and the basic flaws in Biden's $2 trillion infrastructure proposal. On the second half of the show, Prof. Wolff interviews Prof. Marcelo Vieta on his studies of workers' success in taking over enterprises mismanaged by capitalists.

WOLFF: "I just want to say one basic thing, partly as an economist, partly as a human being. One of the tests of any economic system is the adequacy with which it provides food, clothing, and shelter. The three basic conditions for a livable life in order to provide housing in a capitalist system. You either have to give people enough wages and income to afford it or you have to bring down the price of the home or the housing so that they can afford it, without raising their income, either income or price have to be put in a position that housing is achieved. By that standard, U.S. capitalism is failing, it is not providing adequate income to pay for the privately owned housing that is the way we organize that system and that failure is a basic critique of U.S. capitalism as I speak. - Richard D. Wolff

A patron of Economic Update asks: "In communism those who contribute most to society receive the most in return (i.e. the fruits of their labor), and those who contribute less get less. How does this not create the same situation we are in now under capitalism? Does this not create a dependence on your job to keep yourself alive? Is it not the same situation we're in? Additionally, how would the contribution of a painter or philosopher to society be compared to the contribution of a construction or factory worker to society in communism?"

WOLFF: “That the ways we have in capitalism of ranking people, demanding credentials, paying people more or less regardless of their circumstances none of this has to apply none of this is necessary for communism. Sure you can make part of the determination dependent on what a person contributes. But you could also make part of it depending on what the society needs at that time what the circumstances of the family and neighborhood of each worker happens to be, what educational plans they have, how many children in their family, and a whole host of other variables that can, and in a communist society, probably would be taken into account and be periodically adjusted in terms of peoples pay. It’s not a ridged system, it’s a democratically determined open to change way of deciding how to distribute, what a community together produces.”

A patron of Economic Update asks: "I was surprised to learn about the prevalence of farming cooperatives in Rojava. I would love to hear your thoughts on the compatibility of worker coop economies with democratic confederalism, and whether you think the ideological differences between Marxism and anarchism might be unnecessarily exaggerated."

WOLFF: “The decisions of a workplace impact the community and vice versa, and it would be necessary as a commitment to democracy to make their decisions co-respective, to give each side for example veto power over those decisions that impact the other. I am not denying nor would I not respect the relative autonomy of each sector workplaces are one thing and have their laws, their rules, their limits, and residential communities are something else. Decisions appropriate to the residential community with minimal or no impact on the workplace would be the business of the residential democracy, and the same would apply to the workplace, in terms of its democracy. But because significant decisions in either location impact the other, some mutuality some co-respectivity, some co-determination of the decisions, that impact both of them would be part of what the democratization of enterprise and community should share and respect.”

The movement to impeach New York's Governor Cuomo raises complex issues. Cuomo's sexually inappropriate gestures towards 10 of the women he employed, does not match the rape and sexual assault cases against Trump. While Cuomo's behavior is inappropriate and sexist, is it criminal? Dr. Fraad & Prof. Forlano talk about this, the corruption in US politics and the polarization of America.

All Things Co-op: Co-ops and Their Organizations

LARRY: "There's still a great hesitancy among people that are critical of the Soviet Union and the Chinese model to... They don't really have a clear vision about what a social-wide socialism would look like that's democratic."

KEVIN: "What role do we play in the larger cooperative movement in terms of maintaining a kind of anti-capitalist ideological rigidity in the sense of just not accepting that like 'Yes, we're just a different kind of enterprise in the free market economy.' No, we are something different. We are representing a new way of organizing production which is the bedrock for an entirely new society."