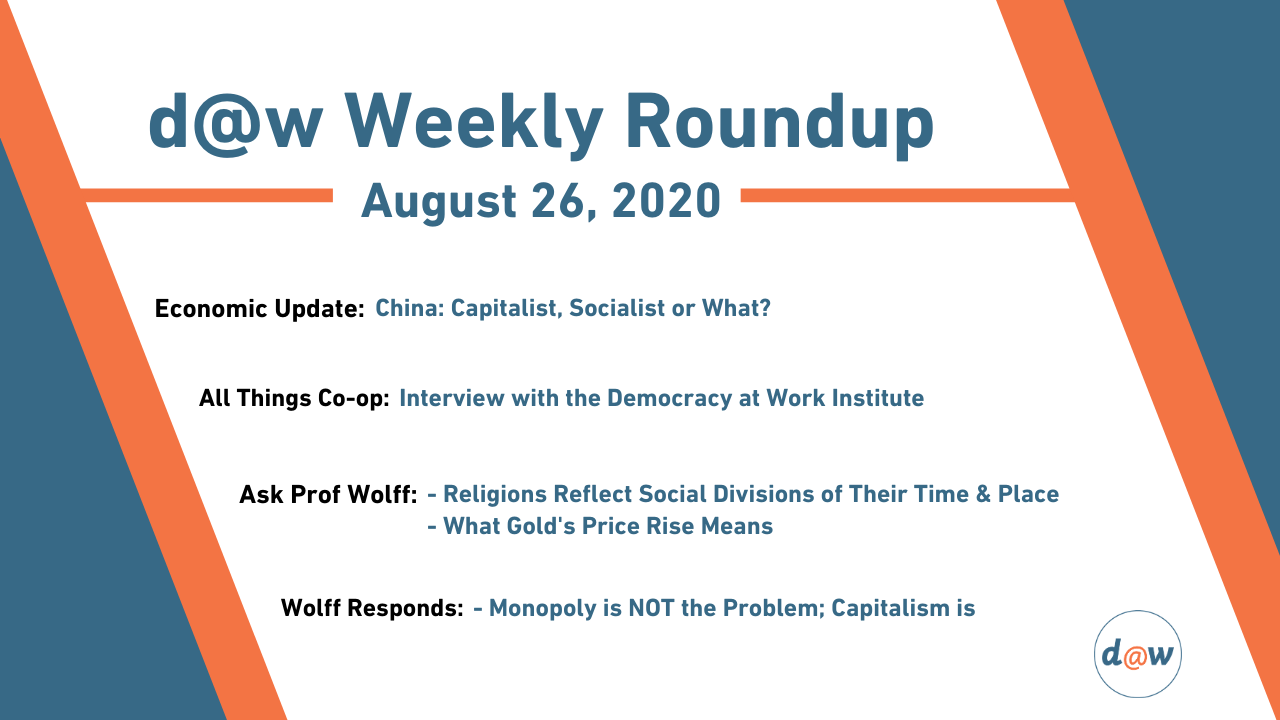 A new All Things Co-op episode features an interview with Program Manager for the Democracy at Work Institute, Zen Trenholm, who talks about various co-op ecosystem development models across cities in the US, and how worker cooperatives can create a more just, sustainable world.

Prof Wolff answered two Ask Prof Wolff questions this week, one about how religions reflect the social divisions of their time and place, and the other about the meaning of the rising price of gold.

In his latest Wolff Responds, Prof Wolff comments on a recent Federal Reserve paper about market power, or monopolies, and argues that we should not become overly focused on just one part of capitalism at the expense of a wider analysis of the system as a whole.

Economic Update: China: Capitalist, Socialist or What?
"China is a socialism that has not moved forward towards communism. It is stuck, or stalled, or blocked from making a further transition… China is clearly an ascending, rising, economic, political, and cultural power in the world. The United States is a descending power… War, twice, killing tens of millions of people and destroying huge parts of the world were the price paid for the struggle between an ascending and a descending power. So could that happen again? You bet.”

All Things Co-op: Interview with the Democracy at Work Institute

"The idea is [the city of Boston] didn't just put money out but ensured that that money was going to be used with some support. So that was a success story of the city being very clear about what they already do, and what's the red tape right now, and then making sure that you're intentional about connecting with who's doing this work right now, and taking in some of those best practices like joining loans with technical assistance. That's just a good idea with any business but particularly if you want to ensure that you have a really strong worker co-op as a proof of concept."

- Zen Trenholm, Program Manager with the Democracy at Work Institute

“There's a tension inside all religions between those who read it through the eyes of a dominating group, a dominating social class, and those who want the religion to reflect, to serve, the needs of those at the bottom of society… The conflict between different readings of the religion, different interpretations, different emphases, will always be there to the extent that society is a place where class conflict is real and a part of society as it is today.”

“People buy gold because they believe (and that's not 100% correct either but they believe) that when everything else turns to crap it's safer to get that actual metal, that it will come through the rough seas, the bad times more safely than almost anything else… Gold can have all kinds of problems. Zooms up in the price of gold have usually been followed by collapses in the price of gold, which is why it is a dangerous, tricky investment to get involved in, and not something for people who don't have a lot of time to keep track of a lot of information… Gold is simply the refuge. Its rising price is a sign that professional investors, like almost everybody else, understands we're in deep trouble”

Wolff Responds: Monopoly is NOT the Problem; Capitalism is