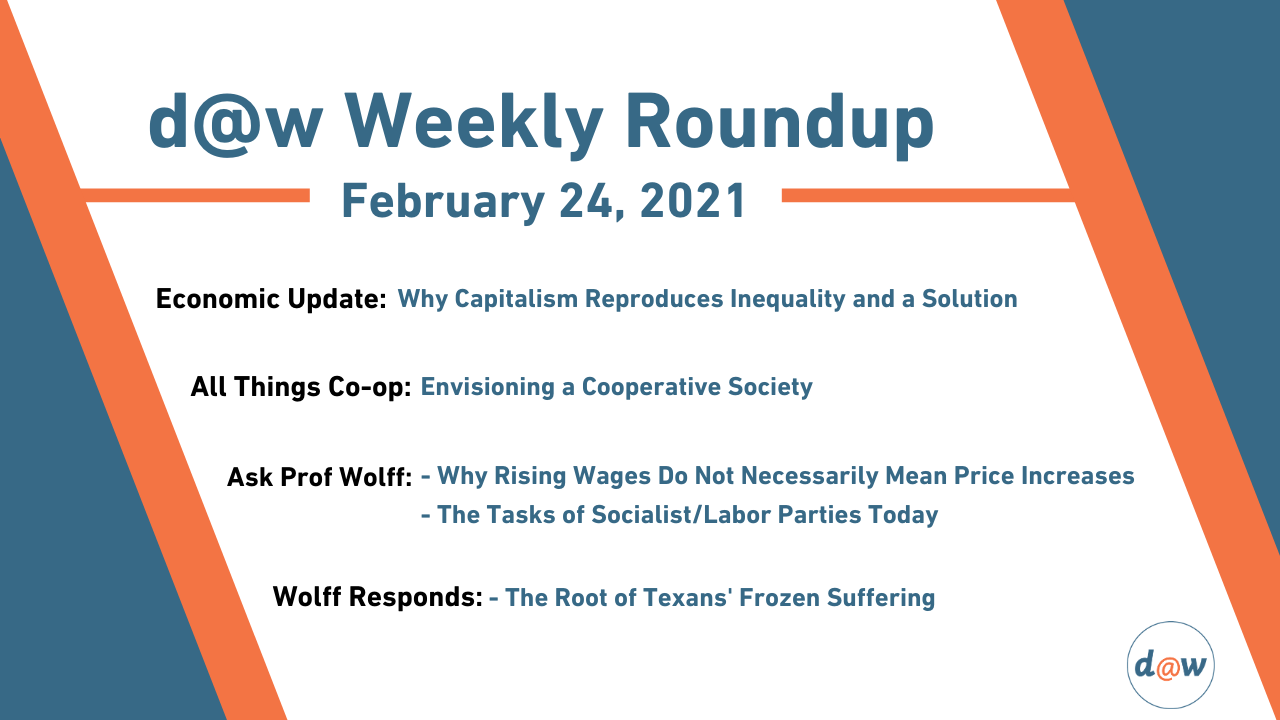 Economic Update: Why Capitalism Reproduces Inequality and a Solution

The extreme economic inequalities of both global and US capitalism are not new or exceptional. Capitalism reproduces inequality and repeatedly blocks or reverses redistribution efforts.Inequality stems from capitalist enterprises' internal organization: a tiny minority, employers, with dominant, unaccountable power enriches itself at the expense of all others, the employee majority. To overcome capitalism's inequality requires democratizing its enterprises' organizations.

Wolff: "Capitalism is a system that reproduces inequality. Well then, why didn't those efforts at redistribution work? We have a system which positions the rich in such a way that they can quite easily and quite regularly evade, avoid, minimize, or altogether escape the redistribution."

In this episode of All Things Co-op Larry, Cinar, and Kevin attempt to answer the often asked question for anti-capitalists - “What does your future society look like?” While one version of a post-capitalist society is Star Trek, we can wait that long - we need something now. So, starting from the standpoint of an economy based on worker self-directed enterprises they discuss what the government in such a society could look like. They attempt to answer how economic decisions could be made, how things could get built, and how we could distribute the goods and services we produce. If you’ve ever wondered what the future looks like, check out this episode.

Cinar: “Democratically controlling production and consumption provides an opportunity for people to actually realize their real selves... A society that's designed for you to self-actualize your real self at the end of the day, your real talents. And I think that's what kind of democratic control of production will allow us to do.”

Kevin: “And I love that it's framed as a challenge too... You have all of this opportunity to be able to become a fully fledged human being instead of having to worry about how you're going to put food on the table. Your food is going to be on the table, so what do you do when food is on the table?”

AskProfWolff: Why Rising Wages Do Not Necessarily Mean Price Increases

A patron of Economic Update asks: "There is an argument that states "if worker wages rise, the owner/board of directors will pass off the cost to the consumer which offsets the gains made in wages to the worker." Is this true?  How would you argue against this?"

Wolff: “The price is what the market will bear. What an employer can charge for the goods or the services workers help produce depends on the demand, depends on people's tastes, depends on how much income they have to spend on all of those things... To claim that all of those other factors somehow don't count and that what's driving the price is “this one thing” you should be deeply suspicious. And the only way to confirm that a rising price is due to the wages as opposed to all of these other influences you would have to look at the books of the company, which the company and that employer will almost never let you see. So they hold back the only real information that could confirm the claim they make: do you smell a rat here? Good you should.”

A patron of Economic Update asks: "I would love to see a response on the nature of the Neo-Liberal reforms worldwide and their impact on the economic and social objectives of leftist political parties. It seems to me at least, that the labor movement worldwide has capitulated on many economic fronts; moving away from their socialist pasts, to becoming compromisers of capitalism."

Wolff: “The critics of capitalism, the socialists (moderate and not so moderate), got taken in after the 1970s. They felt they had to accommodate that there were problems with the socialist societies then dominated by the Soviet Union… They had to accommodate to the notion that capitalism could and would be some sort of engine of progress, engine of growth and engine to sustain and support a vast well-off middle class. All of that is now gone… The slogan we can do better than capitalism has an enormous global audience now… So rather than bemoan the accommodations of the past, I'd rather focus on the future and say socialism now can be the wave of the future if it acts and insists that it has an alternative way of organizing society so that the disasters of a private capitalist dominated society can be avoided.”

In this Wolff Responds, Prof. Wolff talks about the failure of the electrical industry in Texas to respond to the extreme weather that has led to the suffering of so many Texans. Wolff argues that key social institutions and protections like energy and public health should not be left in the hands of private interests who are only motivated by profits.

Wolff: “How do we understand the almost biblical proportions of what is happening in the United States? We have 20 to 25 million unemployed people. We have lost half a million of our fellow Americans to Covid. We have unmanageable fires in California and the west coast, and now we have the failure of the electrical industry of Texas to be prepared for cold weather… If you leave the maintenance of key social circumstances and social institutions and social protections to the mercies of private profit enterprises you are making a basic mistake. What private enterprises do as they will tell you is they make profit their bottom line. There is no mystery here… The energy companies in Texas didn't want to spend a lot of money preparing for an extreme situation because that would have been expensive and that money would have come out of what otherwise they could pocket as their profits… That's how capitalism works and that's why capitalism is not a good way to organize your public health system and it's not a good way to organize your energy system and so on. The problem here isn't the weather and the problem isn't this or that politician however venal they might be... This is a systemic problem.”