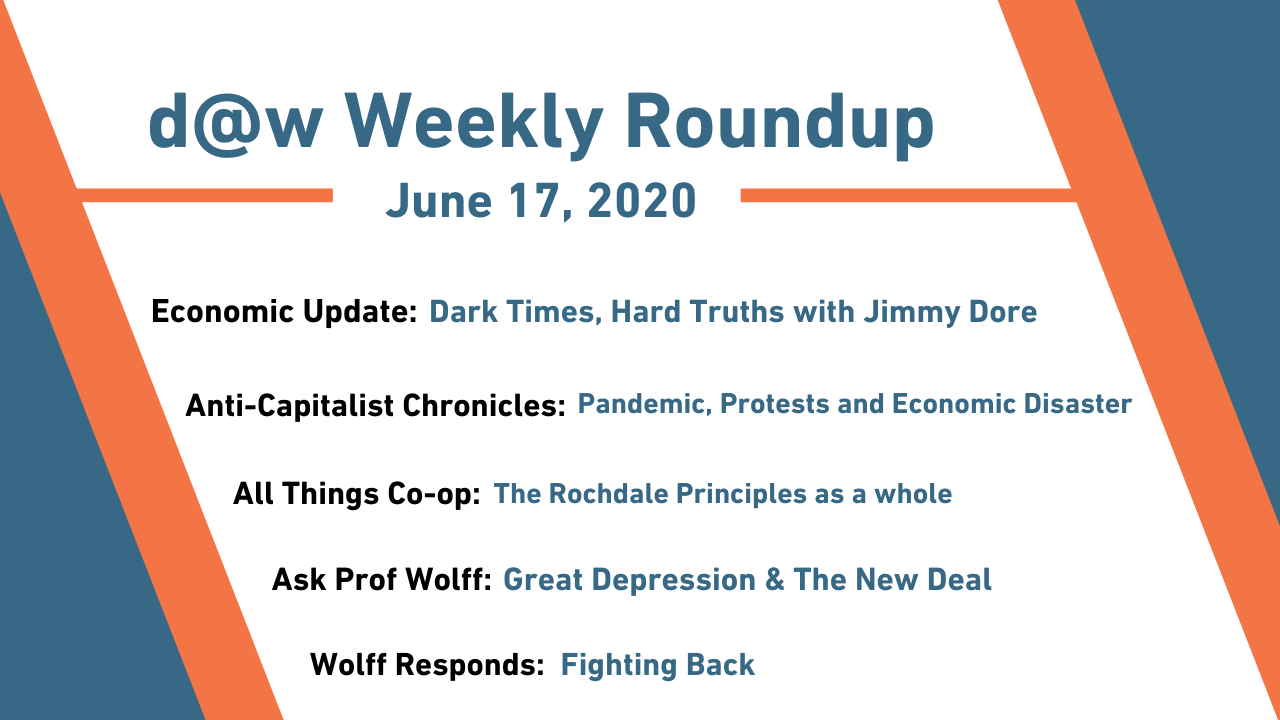 Last week, Prof Wolff received and answered an Ask Prof Wolff question about the Great Depression and the following New Deal. What are the similarities between then and now? In a new Wolff Responds video, Prof Wolff underlined that capitalism is a system in which everyone is out for themselves, and if you’re not big enough to fight back on your own (like the majority of the working class), organization is how you survive the fight.

In a new Anti-Capitalist Chronicles, David Harvey talks about the recent events in Minneapolis and recalls the civil rights movement in the late 1960s when he moved to the U.S. which was followed by a period of reform within neoliberalism. What did reform get us then?

The latest Economic Update addressed class war, how “dominating” citizens only creates more battles, and welcomed Jimmy Dore to talk about today's crises and the roles of the GOP and Democrats.

All Things Co-op’s latest episode is the final episode for Season 2, where they took a deep dive into the Rochdale Principles. After going through these seven principles one by one, they now look at them as a cohesive and intertwined whole that is important to envisioning a world beyond capitalism.

Be sure to check out this week’s releases and share them with your family and friends.

Question from Dr J.F.P.: “How did America get out of the Great Depression? What roles did the New Deal vs the World war have ?”

Prof Wolff: "[In 1929] the peak unemployment was reached: roughly 25 percent, which is roughly the level of unemployment we have now. So that makes 1929 and 2022 of the worst periods in the entire history of US capitalism. But there the similarity stops. It's very different, what happened then and what has happened now."

"Everybody is squeezing everybody they can to survive. That's how capitalism works when it falls apart, when it comes upon the end of the good times, the way we have with the crash of 2008 and now the even bigger crash of 2020. I tell you all of this because if the working-class employees do not organize themselves they will be the losers in this fight."

"The reform movement of the 1960s ended up with the neoliberal developmental project. And now we're back at the moment where maybe, maybe we're in for a big bout of reform. And what will the reform do? Yes, okay, the policing will be changed. But the big change is can we actually redesign cities in ways which is not about capital accumulation and which undermines that process which produces inequality." - David Harvey

"As Nancy Pelosi was ripping up Donald Trump's speech at the State of the Union, she was passing his legislative agenda in full, including giving him an extra 131 billion dollars to go drop bombs on people (that they say he's doing at the behest of Vladimir Putin), but also money for his border wall. Do you understand the capitulation of Democratic Party? It's actually not capitulation, Richard. They're actually on the same team." - Jimmy Dore

All Things Co-op: The Rochdale Principles as a whole

"Individually, [the Rochdale Principles] are quite informative and really have a lot of merit. But when you talk about them all together you really get a good sense of what the potential of co-ops are. All of these principles combined together, compared to capitalist organizations, it really demonstrates how resilient cooperatives are in times of crisis, or in times like this pandemic. Based on the core fact that the organization of production and distribution of profits are democratically controlled by the workers who work there. At the end of the day that keeps the whole organization of the co-op accountable to its workers, accountable to the larger community because they're invested in the larger community. That is something that is so stark a contrast to what we have in capitalism." - Cinar