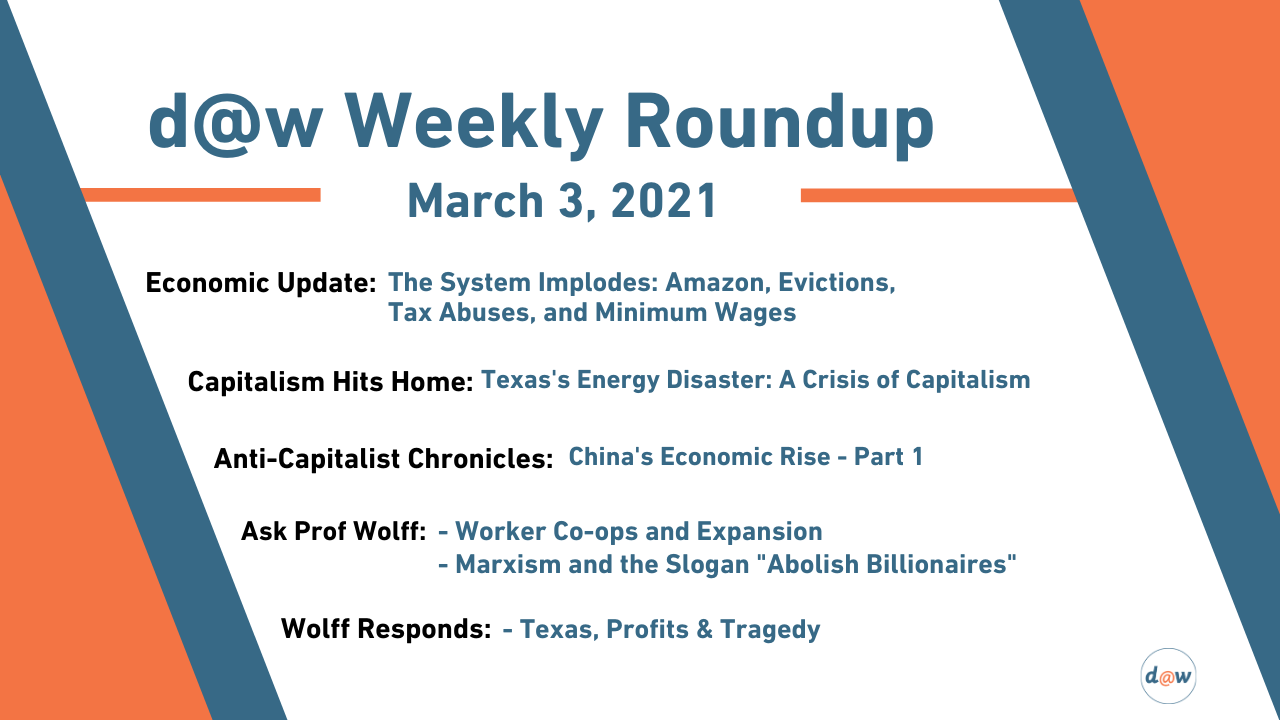 Wolff: "The stock game players on Wall Street have ripped off the rest of this society for long enough. There is no reason to enable or allow them to do it. And nothing exemplifies this better than the craziness of New York state having in effect a stock transfer tax, a sales tax on shares, in the law since 1905 that is "rebated" since 1981 so that the richest amongst us don't have to pay. Extraordinary. But it is the kind of extraordinary bias built into the tax structure of this society. And you can tell by who benefits from this odd tax structure who has the power to shape that structure so it works that way."

In this part 1 of an 4-part series on capitalist commodification, Dr. Fraad and Prof. Forlano talk about the importance of heat and electricity. They discuss the devastation and the loss of human lives that resulted from the extreme cold temperatures and energy mismanagement by ERCOT in Texas. Texas gets 2/3 of its energy from fossil fuels and is the only state that does not participate in the national electric grid. That leaves it easily more open to corruption. Corrupt ERCOT did not weatherize its system as required. They saved money for their corporate backers and CEOs and sacrificed millions of Texans to freeze in the dark. That's capitalist logic for you!

Forlano: “Can you paint the picture of what it is when lights go out for people for days in the freezing cold weather?”
Fraad: “Well, what it is and what it was for people whose oxygen machines run on electricity it meant death or extreme illness because those machines couldn't work. What it means is if you have an electric stove you can't even purify the snow by boiling the snow into water. It means that the pumps that pump the water into your faucet don't work. It means that everything shuts down and you're helpless. It also means that you can't call for help because the telephone lines are down. You're stranded. You're abandoned. You're alone and you have no help.”
Forlano: “I wonder if people will continue to say 'Oh, deregulation. Good idea' in these places where they have come face to face with what it is to have a deregulated electrical market.”

Wolff: “In one sense you're right worker co-ops are not driven to expand by the pressure and logic of competition the way capitalist firms are… [But] would worker co-ops expand? The answer is yes, if and when the demand of the population were to increase with more of whatever they produce. Then either existing worker co-ops will enlarge or new worker co-ops will be set up to meet the demand. That's what they teach you in economics even though in capitalism expansion doesn't happen because of demand any more or less than it happens without an increase in demand because of this hysterical pressure of competition which we are supposed to only look at as having positive consequences… So I think the important thing about worker co-ops is that a surplus would allow them then to do all kinds of interesting things whether it be to provide daycare for their workers’ children, whether it be to provide some benefit to the community where they live, whether it be to enhance their individual incomes…”

A patron of Economic Update asks: "Marxist activist and revolutionary Caleb Maupin claims that the slogan "Abolish Billionaires" is anti-Marxist, and that Marxism means "vast abundance and expanding wealth". Citing the immense progress that humanity has made up to the present day, Mr. Maupin envisions making everyone in the world richer than today's billionaires. Is this all nothing more than a utopian fantasy?"

Wolff: “I don't think “abolished billionaires” carries any implication of Anti-Marxism that I’m aware of. It seems to me that billionaires in a time like this, when we have a few hundred of them in the United States out of a population of 320 more million, is clearly evidence that there's an inequality of distribution of wealth and income… But on the other hand, let's give this journalist his due. I think what he's probably doing is reacting to Anti-Marxist propaganda and agitation, one of whose central themes has long been that what Marxists are, and what socialists are, are people who quote unquote “want to take away my money that I have earned”... So yes, I understand why you might not want to go near a slogan like that because of its association with taking away, but if you can make it clear what you’re after: the wealth of the obscenely wealthy, the billionaires (and remember there are only a few hundred of those in the United States, 0.0001 of the population), the rest of the population could very easily be enlisted to be critical of those billionaires. But that won't happen if you don’t separate them from the billionaires.”

In this Wolff Responds, Prof. Wolff draws parallels between the Enron scandal in California and the recent Texas energy disaster. When the profit motive drives decisions, only a select minority, the wealthy elite benefit. The results for the majority can be disastrous. This was true in California, and is now also true in Texas. Wolff argues that the cost of protecting the energy sources in Texas from the threat of severe weather conditions are a tiny fraction of what has now been lost.

Wolff: “In a capitalist economic system, where profit is the bottom line, these companies have figured out how to profit from manipulating and abusing the dependence on energy that they themselves helped to develop… Profit driven energy companies doing what they want with minimal oversight from a local commission whose members they have (again, I'll be polite) “influence over.” And so they didn't spend the money, which would have hurt profits, to prepare for the cold. They didn't set up a pricing system that would protect people if there was an interruption in the provision of energy. And of course they couldn't go to the grid to get the energy from elsewhere if their own ability to generate were to be impaired. And all of that happened a few weeks ago… With high demand and low supply the prices go up, which is why literally over the last two or three weeks the weekly cost of energy in Texas went from 4 billion to 50 billion dollars…So the next time you hear someone tell you about the wonderful benefits of the profit motive please keep in mind that the cost of protecting the energy sources in Texas from a cold snap are a tiny fraction of what has now been lost. The profit motive made those decisions happen.”