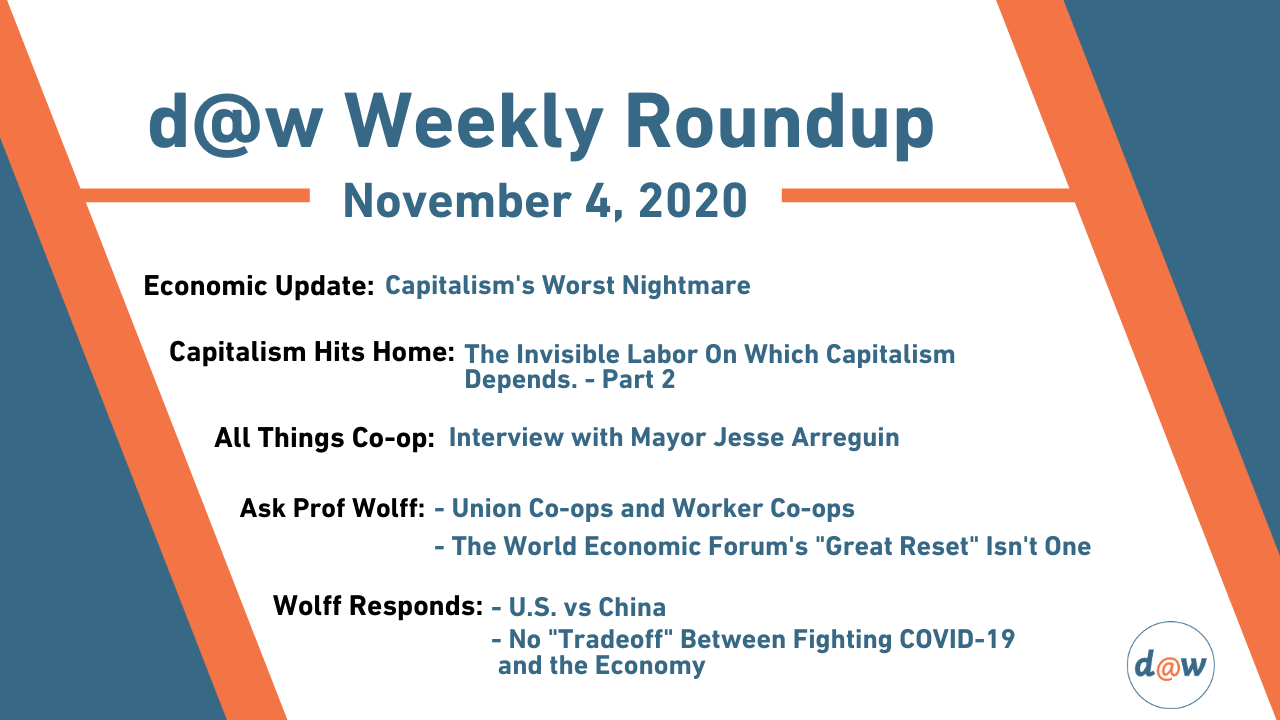 On this week's show, Prof. Wolff explores what major social changes will flow from today's combination of major economic crash and the viral pandemic (capitalism's worst nightmare). To answer, we consider how European feudalism changed after its 14th century combination of economic decline and the bubonic plague. The two big changes then were (1) switching from a decentralized to a strong state, monarchical feudalism and (2) transition from feudalism to capitalism. The two big parallel changes now are also (1) switching to a strong state capitalism and (2) transition from capitalism to a worker-coop based economy.
Wolff: "We could make a great society. It's the capitalists who hold us back... People are seeing this and they want a different economic system just as in their way the serfs of feudalism voted with their feet to go to the cities, and to get out of the lord/serf relationship... We're going to move towards the state having a much more powerful role dealing with the crisis that capitalism could not handle. And we're going to have growing interest in alternative, non-capitalist economic systems."

Capitalism Hits Home: The Invisible Labor On Which Capitalism Depends. And Guess Who Does It? - Pt 2

Part 2 of 2: This week's show is a continuation of the discussion of the labor we all need in order to function in our world: housework, ie. providing food, cooking food, let us avoid distracting hunger pains, that creates the order and cleanliness that allows us to be presentable in life, have clean clothes that don't smell, allow us to find the clothing we need to wear that day, and so on and so on. Fraad and Forlano try to answer why essential labor is devalued.
Harriet: “You assume people are inferior so that of course they should work for you for nothing. And you assume that women's inferior genetic makeup suits them for taking care of all your needs. How very convenient."
Julianna: “I think because we live in capitalism we're all trained to think that where money goes that's what's valuable. And that's it."

Mayor Jesse Arreguin joins All Things Co-op to talk about Berkley's cooperative roots, the legislation that Berkeley adopted in 2016 that provides incentives and support for cooperatives, and how cooperatives are a critical part of a just and equal economic system, and an inclusive recovery from the current pandemic and economic crisis.
Mayor Jesse Arreguin: "My interest in the issue of advancing worker cooperatives is from that lens of capitalism is not working. People are being left behind and we need to put forward a different paradigm."

A Patron of Economic Update asks: "Dear Professor Wolff, I’ve heard you occasionally mention that [email protected] has a Union Coop store. What is a Union Cooperative compared to a Worker Cooperative? Do Union Co-op’s have unique strengths that are not present in traditional Co-op’s? In a worker owned market economy can Union Co-op’s help prevent the creation of new class disparities? As great as the Mondragon Co-op’s are, I have read articles about there being potential tensions between workers and elected management. Thank you for all the work that you and [email protected] do, Josh"
Wolff: “In a capitalist system the union of the workers confronts the employer as an adversary… Whereas in a union co-op the organization of the workers in a union is a completely different operation, because its job is to represent the interests of those who are workers relative to the interests of those who are also workers but are in usually temporarily a kind of directing or supervising position.”

A Patron of Economic Update asks: "What are your thoughts on the World Economic Forums' Great Reset? I'm reading varying accounts on multiple outlets regarding its purpose and motives. Is it a smokescreen? Is it dressing up a failed system?"
Wolff: “The World Economic Forum is basically a spokesperson or spokes institution for global capitalism committing itself to finding ways of coping with the pandemic and with the global crash in such a way as to maintain and indeed to strengthen capitalism. The Great Reset does not question and does not depart from what the world economic forum has been and intends to continue to be… I don't think that capitalism is worth preserving and extending because it has failed us.”

In this Wolff Responds, Prof. Wolff contrasts the response to COVID-10 by China to that of the US.
Wolff: “In the United States there was much talk about a trade-off: if you wanted to help the economy, you couldn't fight the virus. If you wanted to fight the virus, you had to pay the price of economic difficulty. The Chinese did not think that way. They made a different assumption, that the only way to salvage economic growth on at least a scale near what they have achieved in the previous 25 years would be to attend to the Covid-9 crisis. Not a trade-off. Instead, the opposite. The two things went together. A successful fight against the virus would enable and was absolutely essential to a successful emergence from the economic problems created by the virus.”

Wolff Responds: No "Tradeoff" Between Fighting COVID-19 and the Economy

In this Wolff Responds, Prof. Wolff talks about the U.S. tradeoff of dealing with the pandemic on one hand and sustaining the economy on the other. He offers suggestions on what could have been done to cure the disease, prevent a lockdown, employ workers and facilitate learning for students in this country.
Wolff: “Where did this trade trade-off nonsense begin? Well, it comes from the business community. It comes, in short, from capitalists. They don't want the economy locked down because it deprives them of profits… And that's why they pushed to reopen sooner, not later. That's why the docile politicians that do their bidding were out there pushing to reopen the economy…”

Beyond the Election: What Comes Next? w/ Cornel West, Laura Flanders, Chris Hedges and Richard Wolff

This round-table discussion with Cornel West, Laura Flanders, Chris Hedges and Richard Wolff was organized by the Left Forum and co-produced by Democracy at Work. It was held on October 27th and can now be watched on the Left Forum’s YouTube channel.