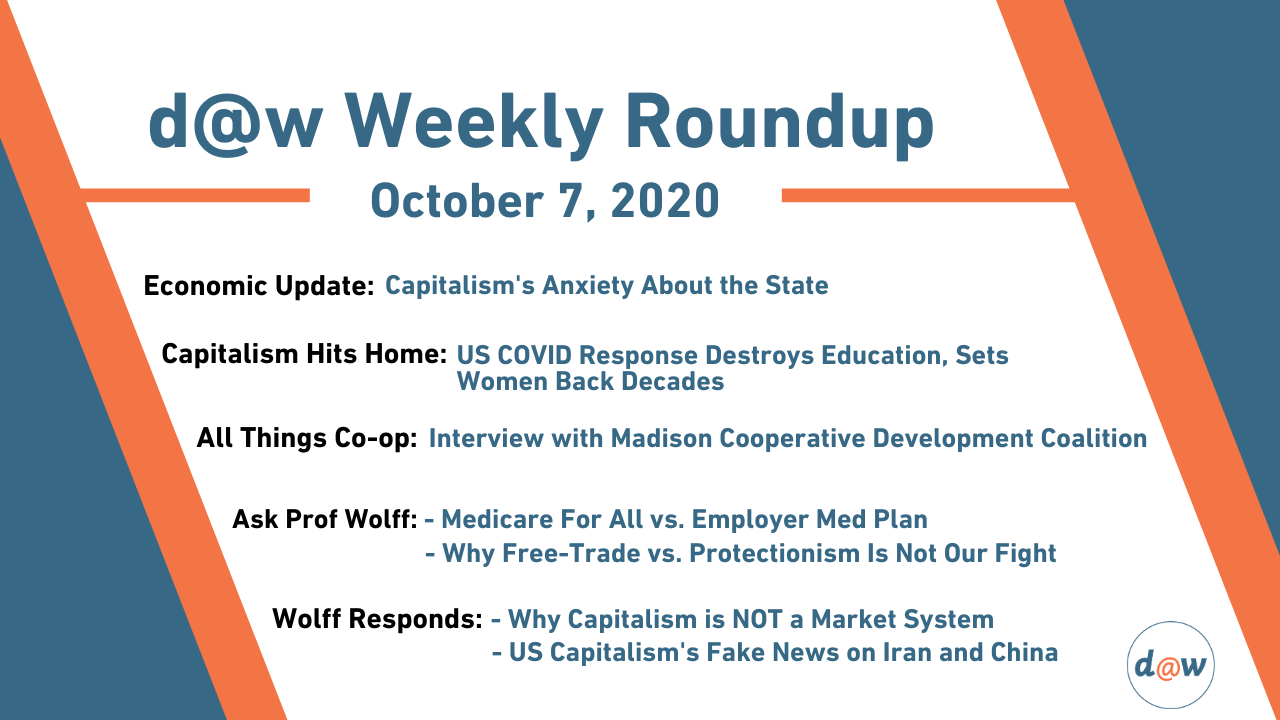 On this week's show, Prof. Wolff presents updates on how capitalism gets in the way of fighting Covid-19, systemic racism and Covid-19, why Europe did not allow the mass unemployment imposed on the US, and Wells Fargo CEO's fake excuse for lack of diversity among bankers. In the second half of the show, Wolff explores why capitalism fears the modern state and how it controls that state.

"WOLFF: The problem of the state for capitalism has to do with what we call universal suffrage: the extension of the right to vote to everyone. That has now become the norm in modern society. At first, in the early days of capitalism, they didn't have this problem with the  state because early capitalism didn't give the vote to everybody... But we now have universal suffrage, meaning everybody has the right to vote. And the minute you have that, capitalism has a problem. Why? Because in capitalism a small number of people control the economy."

On this week's all new Capitalism Hits Home, Fraad and Forlano talk about the of the pandemic on women and the gender pay gap. Public Education, a way out of poverty, has been seriously damaged by the myriad problems of remote learning. Black, Latino, Native American, and poor children are the most affected. Private schooling has flourished. What are ways out and alternatives for those of us who want to champion free public education and gender, race and class equality?

“FORLANO: So we have almost two different issues that we're talking about here. One is just basic child care and then the actual educational component where people are falling behind now because of Covid. They were falling behind before, as you mentioned.
FRAAD: Yes, they were class segregated and they were race segregated before, however it's taking a quantum leap.”

In this episode, Kevin, Cinar and Larry talk with two key figures at the Madison Cooperative Development Coalition (MCDC): Charity Schmidt and Ruth Rohlich. Among their many topics, they discuss how the city of Madison is approaching this cooperative initiative, the importance of community ecosystems, how entrenched legislation creates unforeseen barriers to cooperative ownership that must be changed, financing, and more.

"ROHLICH: Some of the barriers are ones that you know no business planning, traditional, or cooperative, or  whatever could have foreseen. [It shows] just how deeply entrenched our systems are to prevent especially people of color from really empowering themselves through ownership…”

AskProfWolff: Medicare For All vs. Employer Med Plan

A Patron of Economic Update asks: "How do I convince my friend making 55k who fears that Med4All would be a bad deal for him that it would be a good deal?"

“WOLFF: The truth is this: medical care that is provided as a guaranteed right by a national authority [costs] less than the private system here in the United States. Much, much less. The United States has the absolutely dubious distinction of charging more for medical care than anyone else in the advanced industrial world does, and the difference is not small, it is huge… And by the way the medical outcomes here in the United States are very mediocre… A national health care system, like Medicare For All, would be the mechanism the vehicle the means by which to break the medical industrial monopoly who are using their monopolistic positions to gouge everybody else and become richer than everybody else.”

AskProfWolff: Why Free-Trade vs. Protectionism Is Not Our Fight

A Patron of Economic Update asks: "The two main positions on this issue are of course protectionism vs free trade, but I am confused because I've heard socialists advocate for both positions…”

“WOLFF: Marx's argument, which I am simply paraphrasing, runs this way: the fight over free trade versus protection is a fight among capitalists… [The arguments for or against] are hustles Marx argues. Workers have a problem and that problem is capitalism. Whether they're exploited by a group of exporters or they're exploited by a group of importers is really very secondary… Philosophically, in terms of basic strategy, the response of the working class is: that's not our problem. Our problem is capitalism, not the fight between one group of capitalists and another… The program would advantage a person earning 50 to 60 000 even more than it would for the super rich, who can, of course, buy medical care.”

Wolff Responds: Why Capitalism is NOT a Market System

“WOLFF: Markets are not unique to capitalism, they certainly don't define capitalism… I would argue that capitalism is distinctive not because of its use of markets because, as I've shown, they existed long before modern capitalism or any kind of capitalism existed. I think capitalism is unique because of the way it carries out production… What's distinctive about capitalism is the relationship between the employer and the employee, which is quite different from that between lord and serf, and master and slave, even though there are also some similarities… [But] it's nice to describe capitalism as a market system because it gives you the illusion of freedom… The kings we got rid of in political society 500 years ago still live inside our enterprises but they're called CEOs… Capitalism isn't a market system. It's an authoritarian production system that has outlived its usefulness. It is now a drag on the human race.”

Wolff Responds: US Capitalism's Fake News on Iran and China

“WOLFF: The United States is telling citizens and businesses of other countries who they can and cannot do business with. Guess what, other countries don’t like that. They don’t pass laws sanctioning American companies when they do business with whoever they have conflicts with. That is a no-no, at least it was. Mike Pompeo says “We're doing this to Iran because they threaten Europe.” How cute. The German government (which, last I looked, is in Europe ) disagrees. They don't want any of this. They have an agreement with Iran that they’re satisfied with…. Who then is this policy for? The answer is for domestic consumption, counting on the fact that the American people won't be informed, won't know, or won't understand that it is exactly fake news.”