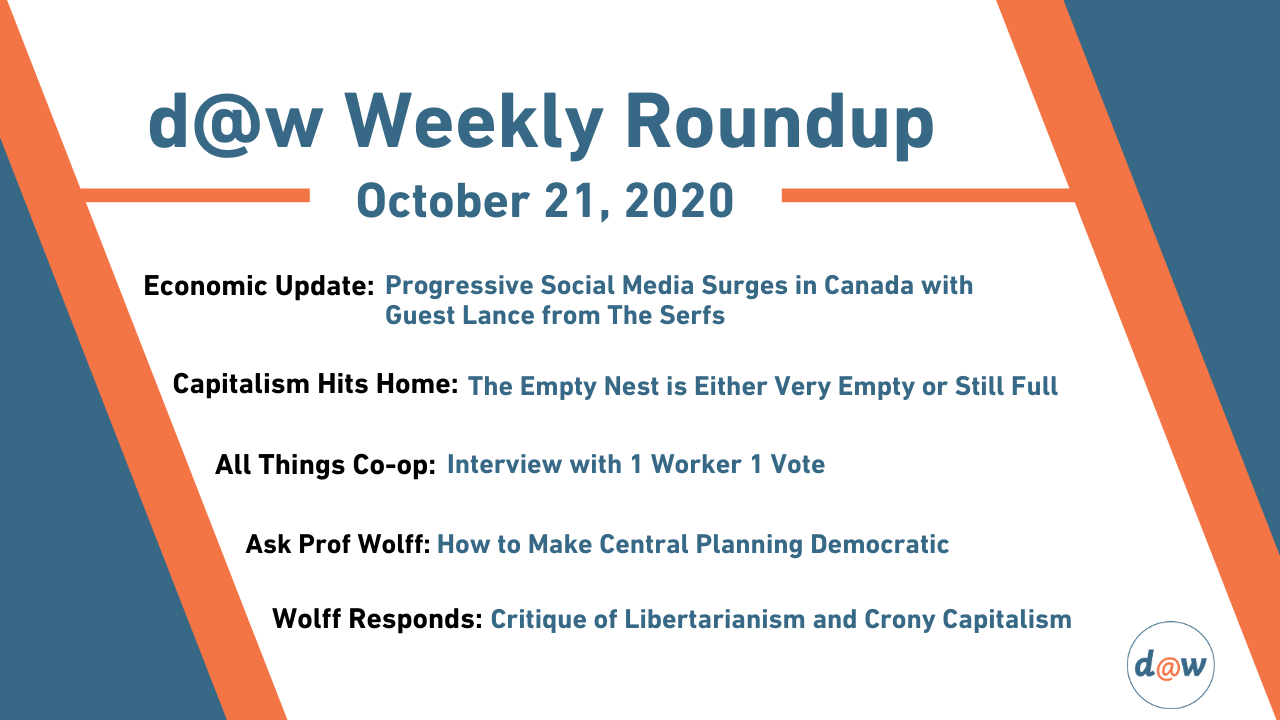 On the first half of this week's episode, Prof. Wolff presents a critique of pandemic eviction and updates on: the real US unemployment costs, Denmark sides with Germany against US pressure, China's successes, and lastly, why there has been no economic recovery in the US. On the second half of the show, Wolff interviews Lance of The Serfs, host of a major Canadian left-wing podcast.

"Wolff: You know what eviction is? It's when the owner of an apartment decides that the profit isn't there if the tenant doesn't pay the rent. And so the person who's the landlord evicts the tenant because he wants to find someone else. It's the profit dictating the eviction. And that's a comment on how we handle our society. It's not a comment on the virus."
…
"Lance: For a long time the right wing dominated the [YouTube] platform... [It] grew so rapidly and they dominated the platform for so long that it took a long time, I think, for the left to catch up... [Now] there is a very decided rise of the left on a lot of these social media platforms."

Capitalism Hits Home: The Empty Nest is Either Very Empty or Still Full

There comes a time in every family’s life cycle where the children leave the nest. Capitalism has been affecting the healthy transition out of the nest for decades and in this time of COVID, the negative effects are becoming more pronounced.
"Julianna: Because they can't find jobs, because college is unaffordable, kids are stuck at home with their family. And it's distorting that individuation process.

Harriet: Yes. It's crucial. What happens is that the person you are in your parents eyes is not necessarily the one you want to be in your life, and they're constrained to that."

In this episode, Kevin, Cinar and Larry welcome back Michael Peck, Executive Director of 1 Worker 1 Vote, and former International Delegate (USA) for the Mondragón Co-operative Corporation (1999 –2019). They have a fascinating and inspiring conversation about co-ops, union co-ops and other hybrid ownership models, the critical emphasis on ecosystem building, the inequalities revealed by Covid-19 and how the pandemic shows we need a cultural reset, and the promising snowballing effect of the cooperative movement with bi-partisan support. Peck's wealth of experience and knowledge in the cooperative field enables him to give many concrete examples of initiatives, movements, and practical applications of these ideas all across the country, and from the Mondragon Corporation.

“Peck: Unions bring solidarity. They are the bastion of solidarity in this country. There is no other organization that has solidarity down to DNA like the American labor movement does. Cooperatives bring workplace democracy. And when we put solidarity together with workplace democracy we have the beginnings of a better social construct."

A Patron of Economic Update asks: "Can central planning be done democratically?

“Wolff: [Historically], central planning wasn't particularly democratic. It had some democratic moments but on the whole, it wasn't. But now Joe's question is, could it be?... If you wanted truly to be democratic you'd have to run the enterprise as a worker co-op. Now, if a planning authority sends you a plan to be commented on, it's going to be done by all of the workers together with the comments the majority vote determines  [to be] sent back up. That would be an enormous step forward in making the planning process more democratic.”

“Wolff: A capitalism without the government is a utopian fantasy… Who are we kidding, the government, if you don't like it, is the creature of the capitalist and it always was… We live in a capitalist economic / political system. If the government acts in awful ways, as indeed it often does, that too is a problem of capitalism. It doesn't drop out of the sky as some intrinsic evil.”