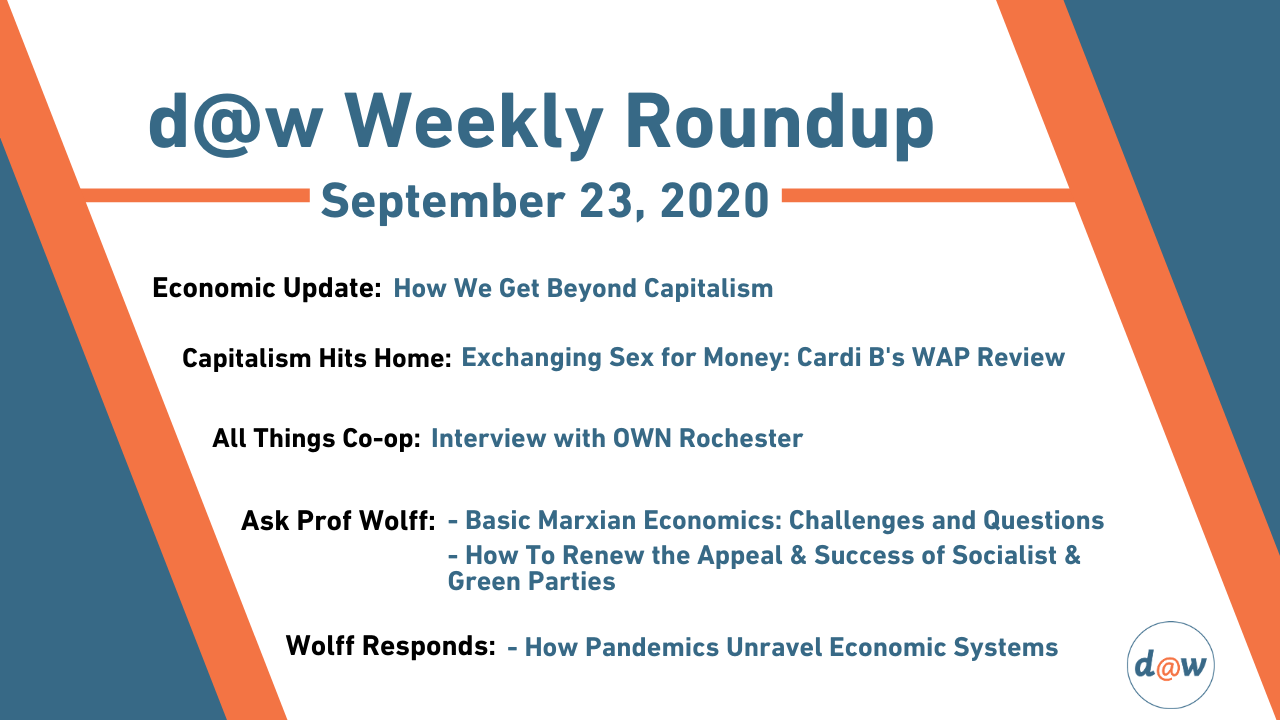 Economic Update: How We Get Beyond Capitalism

"The three countries, out of 133, that are worse off [in terms of social progress are]: Hungary, Brazil and the United States of America... The United States ranked 19th in 2011. And in 2020 it ranks  28th... The United States ranks #1 in the quality of its universities but it ranks #91 in access to quality basic education... The US leads the world in medical technology, yet we are #97 in access to  quality health care... Americans have health statistics similar to those in the following three countries: Chile, Jordan, and Albania,  while kids in the United States get an education roughly on par with what children get in Uzbekistan and Mongolia..."

“FORLANO: Isn’t there some other ground where we can take back our sexuality without having to sell it?
FRAAD: Yes there is. The point you make is excellent. As a feminist and as a founding mother of the 2nd wave feminist movement, [I would say that] the idea was not to sexually objectify and use men but to get out of a system of sexual exploitation of anyone. [In this song] they have the same exploitative attitude, but in reverse… [The song lyrics] also mean that relationships between men and women shouldn't be based on their helping one another, their comradeship, their sexual intimacy, but an exchange: sex for money. And if you don't have the money, who cares about you.”

All Things Co-op: Interview with OWN Rochester

Guest Kate Washington, CEO of OWN Rochester: "We are very cognizant of the need to  develop our workers from wherever they are to  wherever they want to be. And we have to give ourselves the time to do that because this is a long game.... I believe that we should be able to  take advantage of whatever models work and provide the most democratic ownership opportunities for our workers. And if that's an ESOP, and that's what we should be, we can do that. If it's a cooperative, we can do that."

“The profits of employers are the difference between the value added by the worker's labor and what is paid to that worker for adding that value by his or her brains and muscle being used as the employer directs… [Many] don't like this argument because it is the origin, the source, of profit is kind of “ripping off of the working class.” That's right. Workers produce more value than they get paid in value… The notion that the employer is grabbing something that the workers produced is what makes people not like this theory…
The distinction Adam Smith, David Ricardo and Marx all made was the distinction between “use value” (what you get when you use something) and “exchange value” (what you exchange it for in the market, or in simple english, how much it's worth). Marxian theory is developed in terms of exchange value and Howard Baetjer doesn't get that so he wants to compare what the $20 wage means to the wage earner with what else he or she could have been doing in that same time. That's confusing exchange value and use value.”

AskProfWolff: How To Renew the Appeal & Success of Socialist & Green Parties

“I want to take this chance to make an appeal [that left parties around the world] understand that much of the last century's successes that were achieved by socialist and communist parties, critics of capitalism (and there were enormous successes) but those successes were based on appeals that are now exhausted, that have to be updated, changed, modified, to deal with what has happened and what has been the result of efforts to go beyond capitalism… Most socialists have left the organization of enterprises factories offices stores in the old capitalist organization.”

“Feudal society was supported and sustained by one key economic fact... Feudal society was sustained by the surplus of the serfs. Here's then the problem. When the Black Death decimated European society, millions of serfs died, millions got too sick to work. The bottom line, they couldn't deliver the surplus… The political and cultural and urban life created in feudalism disintegrated. In the long run, it was the end of feudalism..
[Today,] millions of people are not working. Millions of people cannot work, and will not work, which means what it means the same to capitalism today that it meant to feudalism back in the 14th century. Surplus, the difference between what a worker is paid and what a worker adds to the value of the enterprise that pays him (what we call the profit) that's not being produced.”