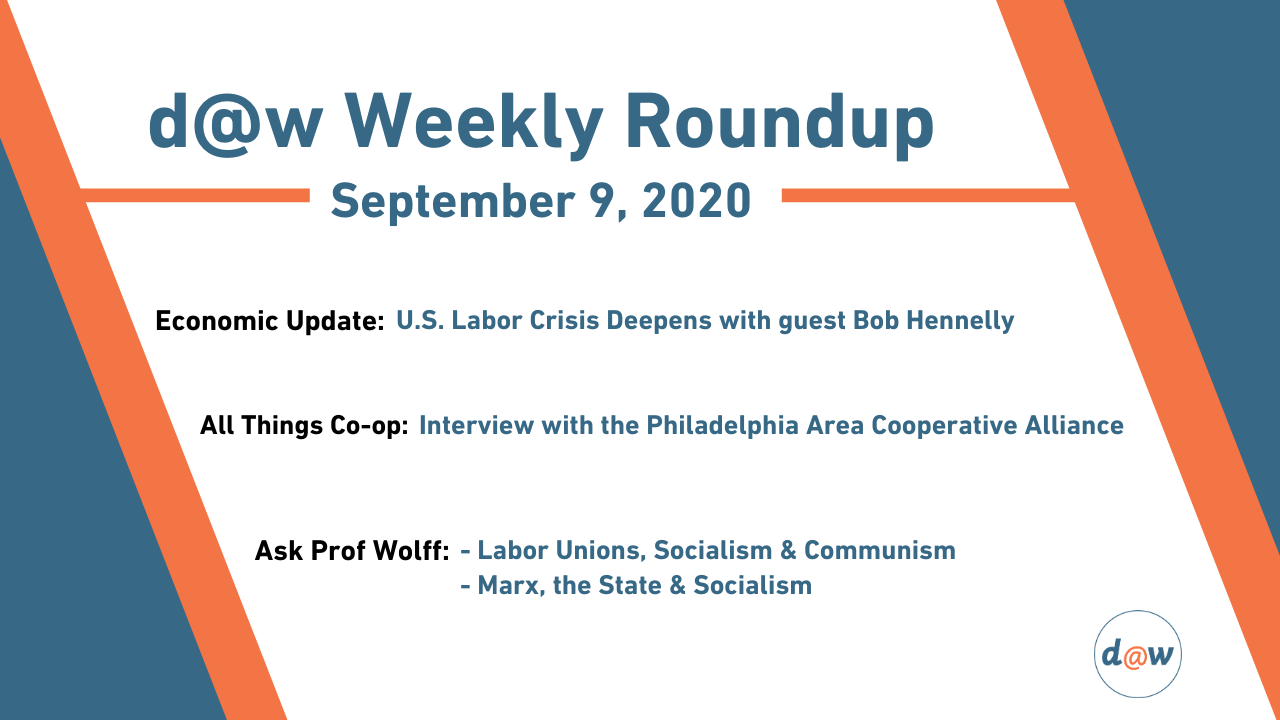 Jamila Medley, the Executive Director of the Philadelphia Area Cooperative Alliance (PACA), joins the latest episode of All Things Co-op to talk about her work catalyzing the growth and popularity of worker co-ops in Philadelphia, how worker co-ops represent a viable alternative to a capitalist system in decline, and more.

Prof Wolff answered two Ask Prof Wolff questions this week. The first addressed a question about Prof Wolff’s interpretation of Marx’s opinion of the state’s role in socialism. The second question was about the role of socialists and communists in labor unions, both in the past and present.

"And when working people act like this, take this step, non-violent, non-confrontational, but crystal clear, what's happening is (and this is so important) something which a great political leader of the past once called "Dual Power." It's when the old systems of power are so collapsed, so weak, so irrelevant that human beings have to find new and different ways to express their political goals... [And] they've already spawned copy-cats... #ScholarStrike September 8th & 9th."
- Richard D. Wolff

"And I would say that one of the problems in terms of what's been happening in the lack of aggressive response and militancy, has been the unions themselves historically (to be honest) have been subject to corruption [and] they've had a problem with succession planning. Men our age and our circumstance are the people that have been leading these organizations. And there's been resistance historically to providing updraft for the young people, of all different backgrounds and circumstance, who are ready and able."
- Bob Hennelly

All Things Co-op: Interview with the Philadelphia Area Cooperative Alliance

"Black folks have always done this [cooperative economics]. This is nothing new... Reach back into the communities that we came from in West African cultures, all of those practices were already there. But now we're here 21st century capitalism and a lot of us don't remember that this is how we've held it together, and how we've continued to be present and thrive in many facets of our community life."

“Unions believe as the socialists do that organizing workers is a sure way to a progressive social change unions have been behind many of the best progressive steps taken in the United States… What do you mean by socialist countries? If you mean countries that are governed for example by a socialist party let me pick two today the government in Denmark and the government in Portugal are governed by the socialist parties… [Both] have very strong very independent labor unions as they do in every other country that calls itself socialist in Europe. So the notion that there is in socialism no place for independent militant trade unionism is simply stone cold false…”

“I think here is what happened in the 19th century while Marx and Engels were alive and writing. Marxists, critics of capitalism, who reached the conclusion that the system as a whole had to be gone beyond that it wasn't a matter of fixing or reforming but that you needed a wholesale social change... [It] was a big debate throughout the 19th and well into the 20th century: the reformist [versus] the revolutionary path. But what both sides agreed on was to take over the state as an institution within capitalism... But is that socialism? And the answer is unequivocally, in my view, no. And let me quote no less an authority than Lenin…”

Learn more about Prof Wolff's latest book, The System is the Sickness: When Capitalism Fails to Save Us from Pandemics or Itself, that comes out next week:
www.democracyatwork.info/books