Cities After... Dr. Andy Merrifield on the Dogma of Inter-Urban Competition 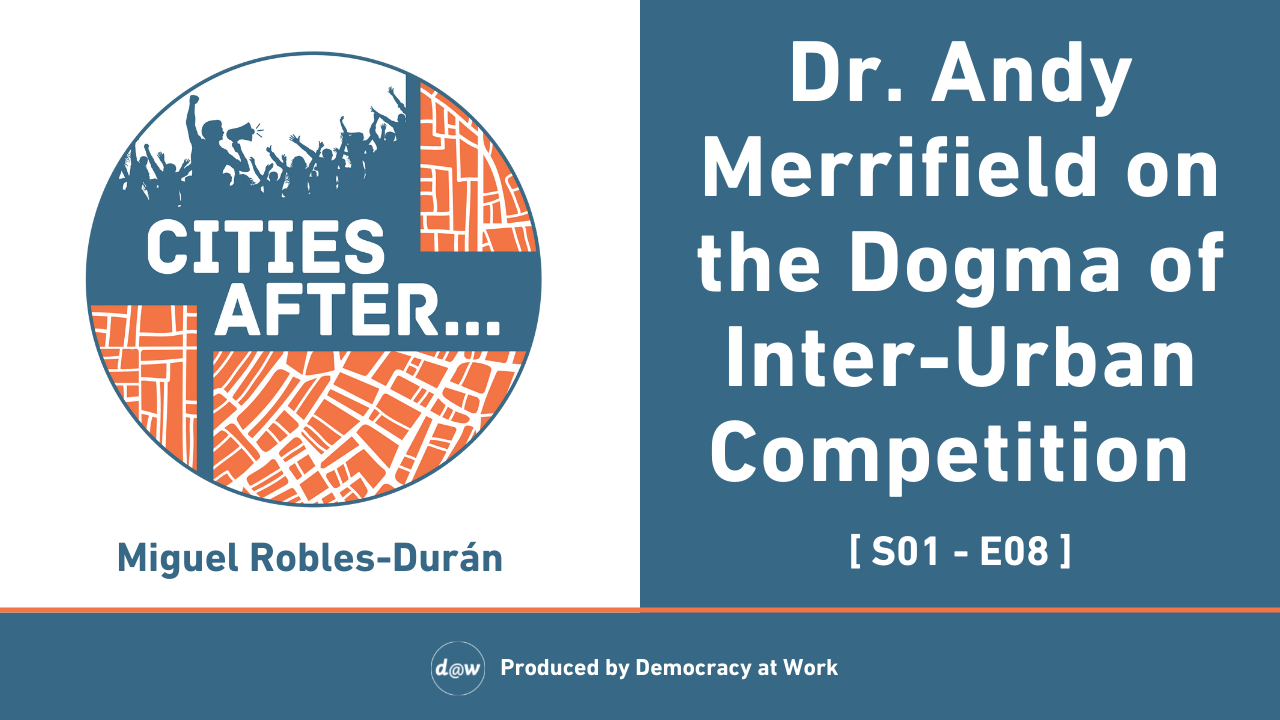 In this episode, Prof. Robles-Duran is joined by the famed Marxist Urban Theorist Andy Merrifield to have a conversation about inter-urban competition, the socio-spatial consequences of late neoliberalism and the pervasive privatization of urban societies.

Cities After... is a @Democracy At Work  production. Launched in May of 2021, it is a bi-monthly podcast about the future of cities; grounded in our daily urban struggles, it is part dystopian and part utopian. The intention is to entice civic imagination into action, because a more just and sustainable urban future is possible. A new episode is released every other Tuesday at 4pm EST.
We are committed to providing these podcasts to you free of ads. Help us keep this show sustainable by supporting Cities After... via the links below.
SUBSCRIBE: Apple Podcasts | Google Podcasts
SUPPORT: Become a monthly donor
LEARN MORE about this new podcast: Cities After... hosted by Miguel Robles-Duran

About our guest:  Dr. Andy Merrifield is a British independent scholar and one of the most prolific urban theorists writing toda. He is the author of a dozen books and numerous articles, essays and reviews in The Nation, Harper’s Magazine, New Left Review, Adbusters, The Guardian, Literary Hub, Brooklyn Rail, Radical Philosophy, Monthly Review, Jacobin, and Dissent. Since completing his PhD in Human Geography from the University of Oxford in 1993, Dr. Merrifield has dedicated his life to teach and write about urbanism, social theory and literature from a unique marxist perspective. Amongst his many writings, he has published three intellectual biographies on Henri Lefebvre, Guy Debord, and John Berger; a widely popular existential manifesto for liberated living, titled The Wisdom of Donkeys; a book about love and cities, titled The Amateur; and a book inspired by the stories of Raymond Carver, titled What We Talk About When We Talk About Cities (and Love). His latest book, Marx Dead and Alive, was published by Monthly Review Press in November, 2020. Dr. Merrifield is currently working on a book on beyond plague urbanism.

“Hennelly brilliantly analyzes our capitalist crises and how individuals cope with them, tragically but often heroically. He helps us draw inspiration and realistic hope from how courageous Americans are facing and fixing a stuck nation.” - Richard D. Wolff