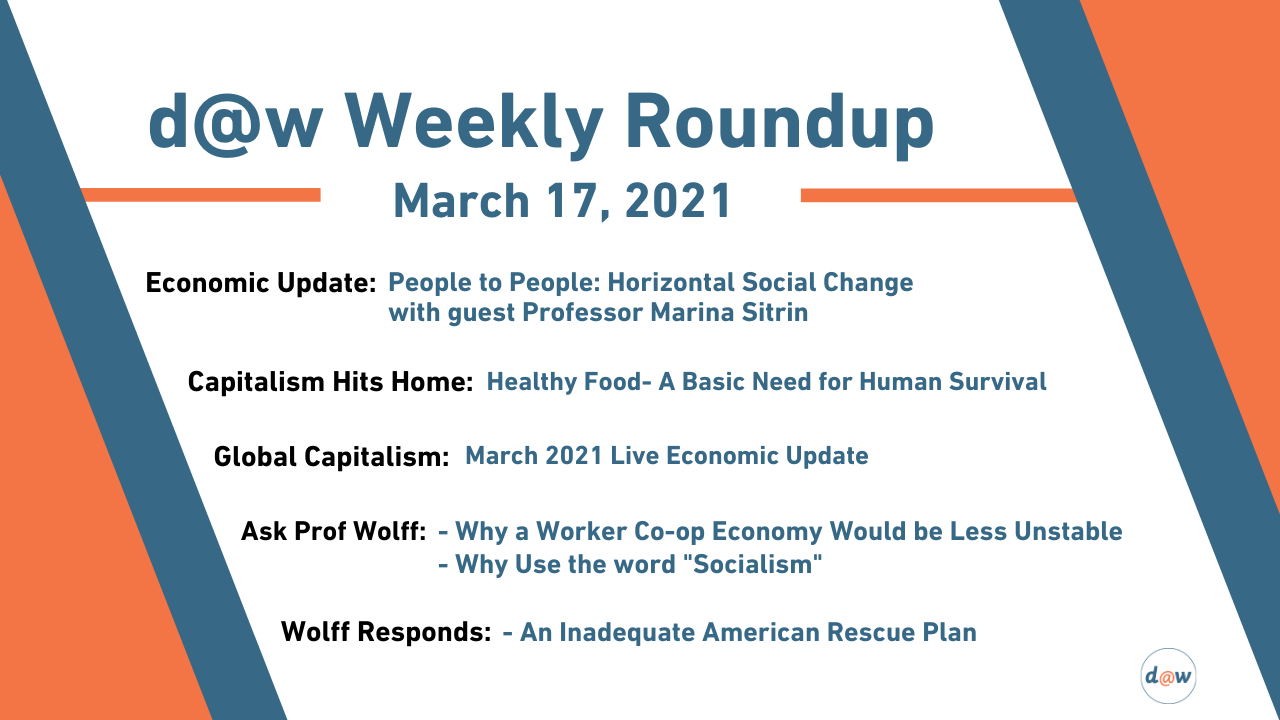 On this week's show, Prof. Wolff presents updates on the Texas energy catastrophe, the 'Robinhood/Reddit' Wall Street incident, college workers organizing, Hollywood's dependency on China, and how New Zealand used total lockdown to beat COVID and support its economy. In the second half of the program, Wolff interviews Prof Marina Sitrin on pandemic solidarity and horizontal social action.

Wolff: “Therefore when you buy a share of stock you've got to face something: you don't know. That's not your fault, it's the situation which prevents you from knowing. Therefore it is, to be blunt, a crapshoot. It's a casino. And you may have noticed that in the casino the house always wins in the end. Wall Street is no different."
…
Sitrin: "Millions and tens of millions of people around the world right now are surviving because of each other, not because of our institutions during the pandemic. So that should make us think"

In this part 3 of the 4-part series on capitalist commodification, Fraad and Forlano talk about the need for healthy food for basic human survival. Making food a capitalist commodity for profit is leaving our rich nation's citizens, and especially our children, hungry. How do other nations feed their people? What can we do about America's hungry people? Fraad and Forlano explore the answers to these questions.

Fraad: ”We store food in silos while people are starving”

Forlano: “Food gets produced based on profitability, not on the amount of starving people we have in the world”

In connection with Prof. Wolff’s discussion of the main topic above, he also gave short updates on: who lost what; who gained what; where is the US economy headed now; and lastly, political fallout: revisiting the January 6 DC assault.

Wolff: “There's something profound in a global capitalist system that is protecting the profits of a small number of companies around the world, particularly American, at the price of death and illness all over the world.”

AskProfWolff: Why a Worker Co-op Economy Would be Less Unstable

A patron of Economic Update asks: "My question is, would worker owned and operated cooperatives operating in a market driven, profit motivated economy be more immune to the boom-bust cycle we see in capitalism? Or would such cooperatives just be more resilient throughout the "business cycle?" What about an economy composed of cooperatives makes it less unstable than a capitalist one?"
This is Professor Richard Wolff's video response.

Wolff: “We workers would be just as interested in our position as workers as in our position as employers since those two are the same in a worker co-op unlike a capitalist enterprise… The response of a co-op worker co-op based society could much better handle whatever disturbances arise than the capitalist system because it does not have to protect a basic production system that pits employers against employees”

AskProfWolff: Why Use the word "Socialism"

A patron of Economic Update asks: "My question is: The word "socialism" has been completely corrupted in the USA and associated with all kinds of false and negative connotations, so can we come up with new terminology to express the concepts that you are describing when you discuss the way to move forward in society to create the fair and equitable government that would truly be "of the people, by the people, and for the people?" Shouldn't we rebrand socialism as progressive democracy, or economic democracy, constitutional democracy, or with some other new terms for getting Americans to accept this new possibility of governance? Now that Democrats and Republicans have both proven through this pandemic that they are working toward the same goals (maintaining the status quo for their donors and doing as little as possible for the voters and taxpayers that put them in office) isn't this the most opportune time in history for a new, third party to form and gain traction with the public?"
This is Professor Richard Wolff's video response.

Wolff: “...We're for freedom not slavery, we're for non-monarchy we prefer democracy, and likewise we can say, we prefer a socialism over a capitalism. That doesn't mean we have to  accept everything that socialists have done. Indeed, we should, we can, and we are, making  distinctions. Look here in the United States, in a sense there's a certain amount of proof or evidence for what I'm trying to argue. Yes, socialism and communism were equated and demonized for most of the 70 years since the end of World War II no question. And yet, starting in 2016, and now again in 2018, and again in 2020, politicians have accepted the name socialist they haven't run away from it as they did in the previous 70 years. It isn't political suicide anymore...”

In this Wolff Responds, Prof. Wolff talks about the rescue plan passed by Congress in response to the Pandemic. He argues that it is inadequate given the size of this crisis. This is the first major economic crash since the Great Depression and it has occurred alongside a global public health crisis. These unprecedented events need an unprecedented response that is system and structural. Relief as prescribed by the Biden administration is simply not enough.

Wolff: "This plan is a woefully inadequate response to the scale, the size, the power, the importance of the crisis we face at this time… It does provide some relief, for sure. But providing some relief, the traditional Democratic alternative to Republicans, that won't do now… The number one failure of the American Rescue Plan which was to raise the absurd low (by all international standards) minimum wage. All that was proposed was to raise it to $15 by 2025 and this government caved in and didn't do it… “We're all in this together,” some of us have been told. No, we're not. We have 600 billionaires who made hundreds of billions of dollars more during the pandemic while 60 million people endured unemployment for one or more months during that time… If all the Democrats have been able to do is to once again be a little more sensitive than republicans, they will continue to allow the growing inequality, the growing divisions, the disappearance of any concentric coming together. You're paving the way for the collapsing center of this society.”