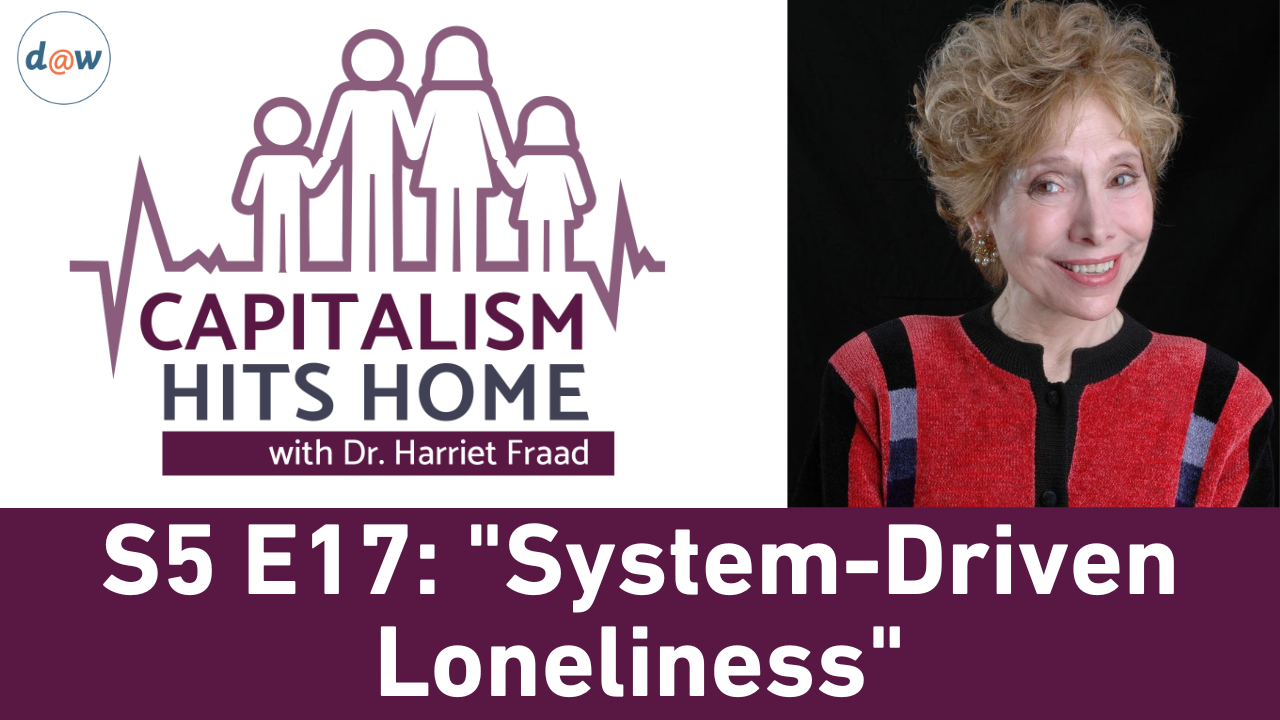 In this episode of Capitalism Hits Home, Dr. Fraad takes a look at capitalist-driven loneliness. Crime is often thought of as a person breaking the law, but what about the crimes capitalism allows, and even celebrates? In our workplaces we get ripped off, monitored, and lose our humanity. Commodities are sold to us only to get recalled, addictive pain-killers destroy lives with zero accountability, powerful men get away with sexual assault, and politicians are bought out and no longer serve everyday people. Capitalism infiltrates every corner of our lives and leaves us feeling utterly alone and helpless. What is the antidote to this state-sponsored loneliness? Connection. We must join unions, movements, and connect with our fellow Americans to demand a system that supports the masses. 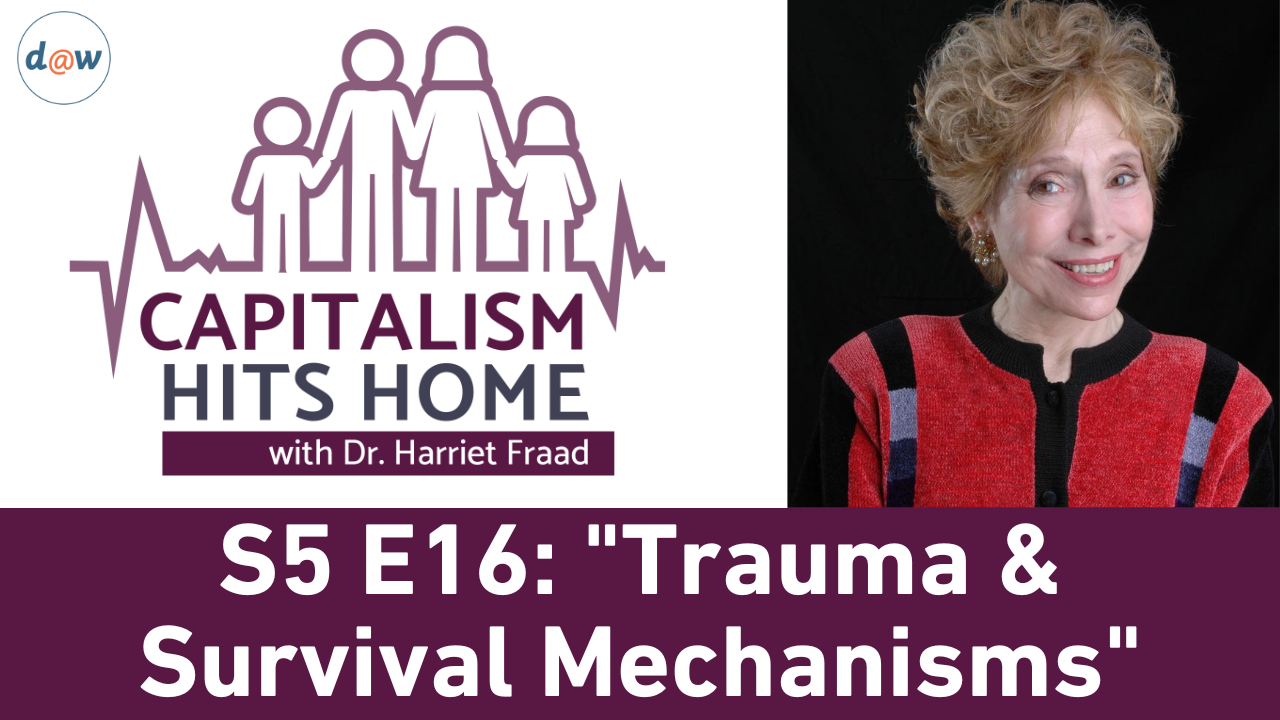 In this episode of Capitalism Hits Home, Dr. Fraad draws on her therapeutic expertise to discuss psychological mechanisms people unconsciously rely on when facing a reality that is too much to bear. These tools—dissociation, denial, and projection—can happen in both our personal and political lives. Fraad looks at personal traumas from clients as well as societal traumas, such as war and police brutality, to explore how commonly humans rely on dissociation, denial, and projection to not face hard truths. In order to heal, both personally and as a society, however, we must learn to look at and call out these injustices. These psychological mechanisms serve an important purpose for survival, but the realities still exist and continue to take a toll.

United We Win, Divided We Fall

In this episode of Capitalism Hits Home, Dr. Fraad continues her discussion of the recent Supreme Court decisions and asks: why were these decisions made when they do not align with the majority of American’s beliefs? When a system fails for the mass of people, fascism can develop to ensure that system continues. As the US becomes more and more divided, Fraad argues that we must remember our commonality as the employee class. Leftist victories in countries such as Chile, Colombia, and France remind us that when people unite and form coalitions, they win. We, the mass of Americans, must unite each of our movements—climate justice, BLM, feminism, LGBTQIA+, Indigenous rights, socialism, and more—in order to build a better world that reflects our values. 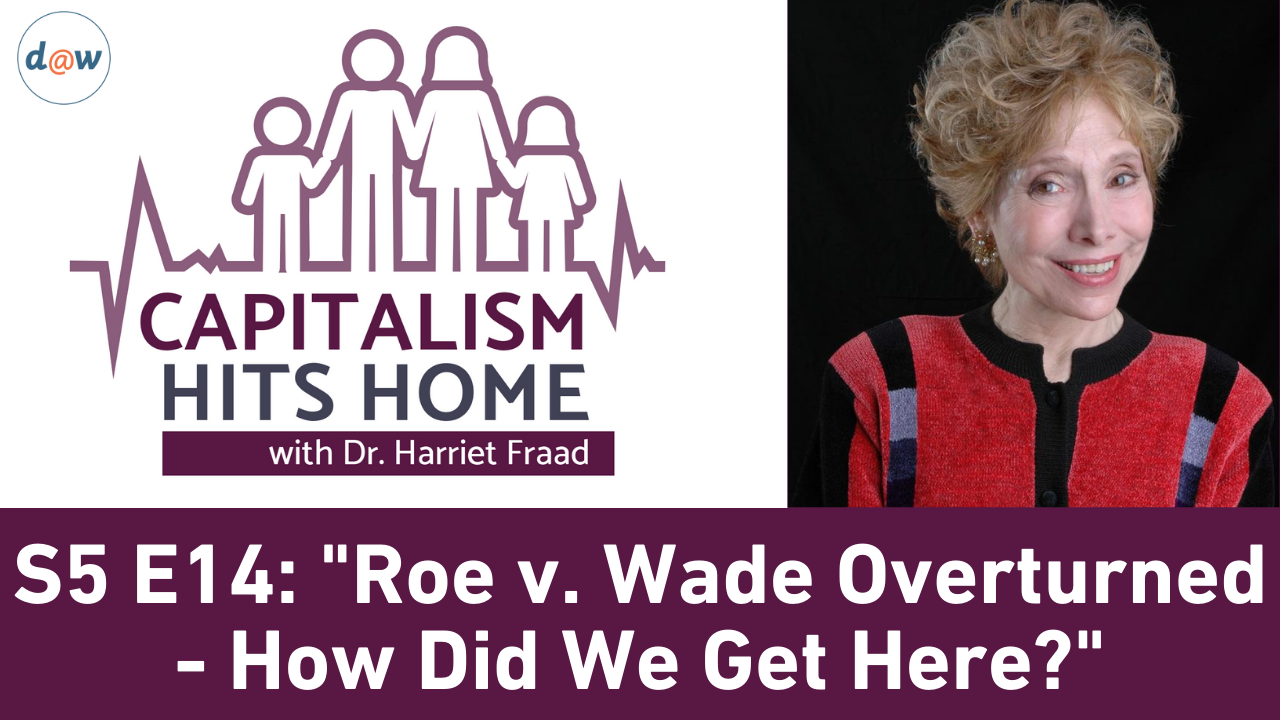 Roe v. Wade Overturned - How Did We Get Here?

In this episode of Capitalism Hits Home, Dr. Fraad looks at the recent dramatic US Supreme Court decision to overturn Roe v. Wade. She argues that all of the SCOTUS decisions for 2022 share a common purpose. First, they help to create a capitalist authoritarian state enforced by unaccountable police. Secondly they divide the mass of people. They antagonize divisions between people and fuel culture wars. The goal is to create hierarchical and hostile divisions that keep Americans from uniting as an employee class and winning.

“We have to accept that empire and militarism is not what’s going to save the world, it’s what’s going to destroy the planet.” In this episode of Capitalism Hits Home, Dr. Fraad continues discussing America’s problem with gun violence. Because the US never converted to a peacetime economy after WWII, it continues to spend billions waging wars, stockpiling military equipment, and funding overseas conflicts. This militaristic culture enables domestic terrorism and mass violence. To counteract this, we need to encourage our many separate social movements to join together and fight to redistribute the excessive military budget to universal health care, child care, affordable housing, decent wages, climate justice, and more. 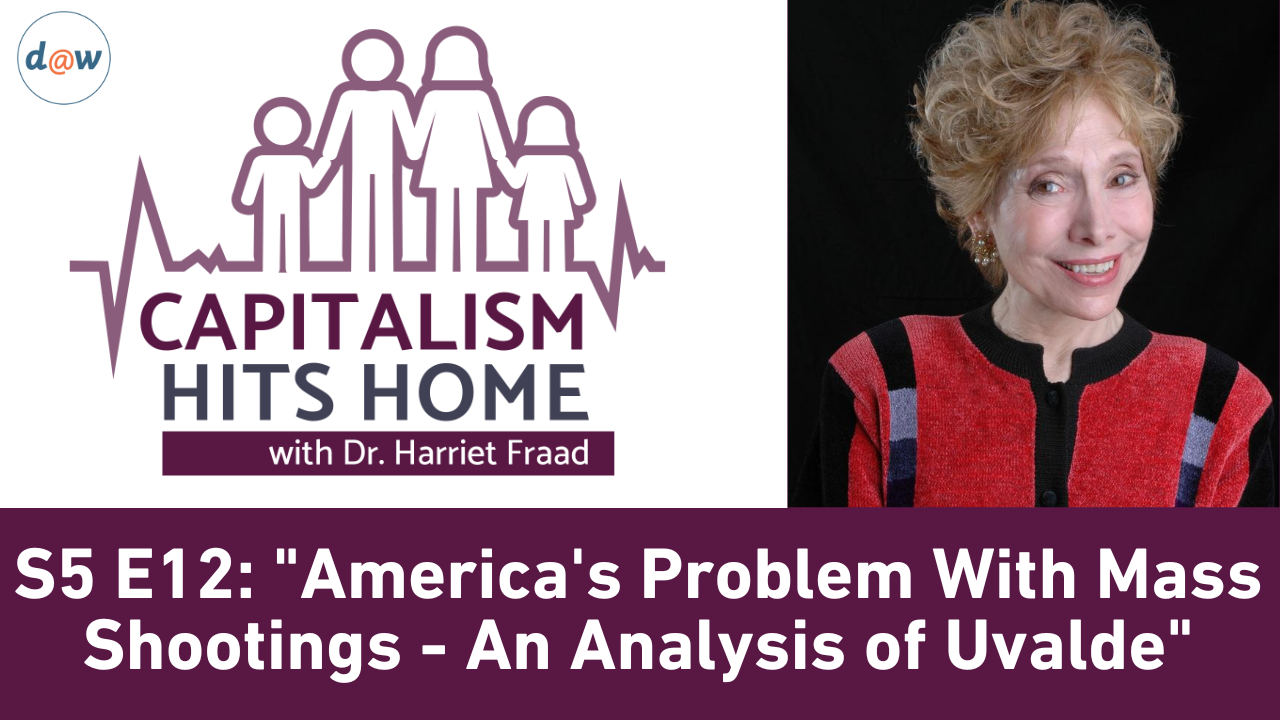 America's Problem With Mass Shootings - An Analysis of Uvalde

In this episode of Capitalism Hits Home, Dr. Fraad looks at mass shootings in the US and in particular the most recent tragedy in Uvalde, Texas. She examines the psychological, emotional, political, and economic reasons the US is the world leader in mass murder, and suggests solutions to end this cycle of violence and death.

Connection - The Foundation of Mental Health

"Capitalism is really bad for our health.” In this episode of Capitalism Hits Home, Dr. Fraad discusses mental health through the lens of a 4-legged table of connection: intimate relationships, friends, larger groups such as PTAs, work, or political groups, and connection to your country and shared humanity with the world. Under capitalism, Fraad explains, each leg of the table is made very shaky. With abuse, alcoholism, crime, and suicide all going up, as well as unemployment and illness rising, it’s clear that our social fabric is breaking down. Cooperation and connection, the most important contributors to mental health, aren’t protected under capitalism. In a system that allows for such deprivation, our only antidotes are to have hope and create connection through political activeness, strikes, unionizations, and more. Hope is not passive, it can be an active way to build a better world. 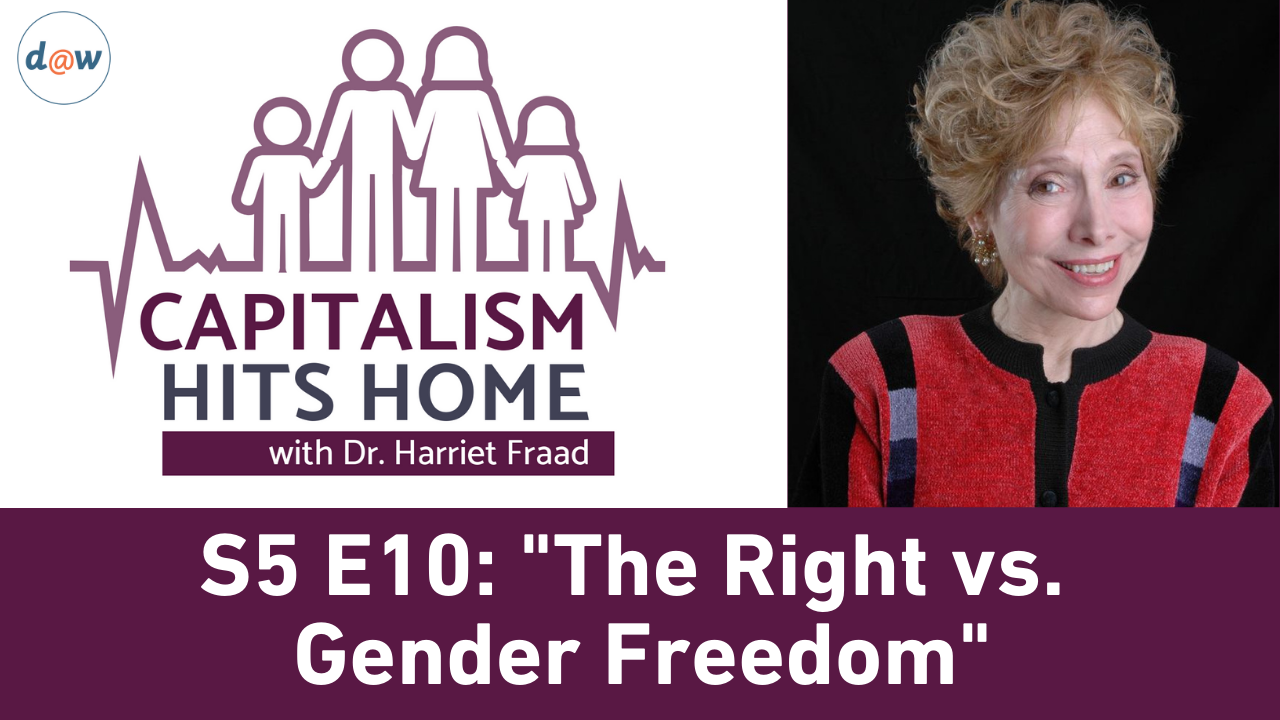 The Right vs. Gender Freedom

With rising inflation rates, mass resignations, poor working conditions, and expensive housing, it’s clear that capitalism in the US is falling apart. To counter this, the right wing is working hard to repress each and every marginalized group in order to keep the working class divided. In this episode of Capitalism Hits Home, Dr. Fraad looks at that fascist push to maintain a hierarchy in family, faith, morality, and nationalism. One way the Right does this is by attacking women and LGBTQ+ rights with abortion bans and anti-trans bills. In this legal stage of early fascism in the US, we need to take cues from other countries that successfully countered right-wing attacks on body autonomy by creating coalitions and unified fronts.

In this episode of Capitalism Hits Home, Dr. Fraad continues her discussion of mental health. She argues that we need to do away with the medical model of mental health that diagnoses depression as a brain disease and seeks to treat it exclusively with medication rather than acknowledging the societal and systemic conditions which lead to this chronic unhappiness. Fraad contends that human misery stems from a lack of meaningful connections to others, society and the world. Capitalism keeps people isolated and often unable to satisfy basic human needs. To truly address the mental health crisis the US faces, we need to create a system built on collective resources, collaboration, and connection. 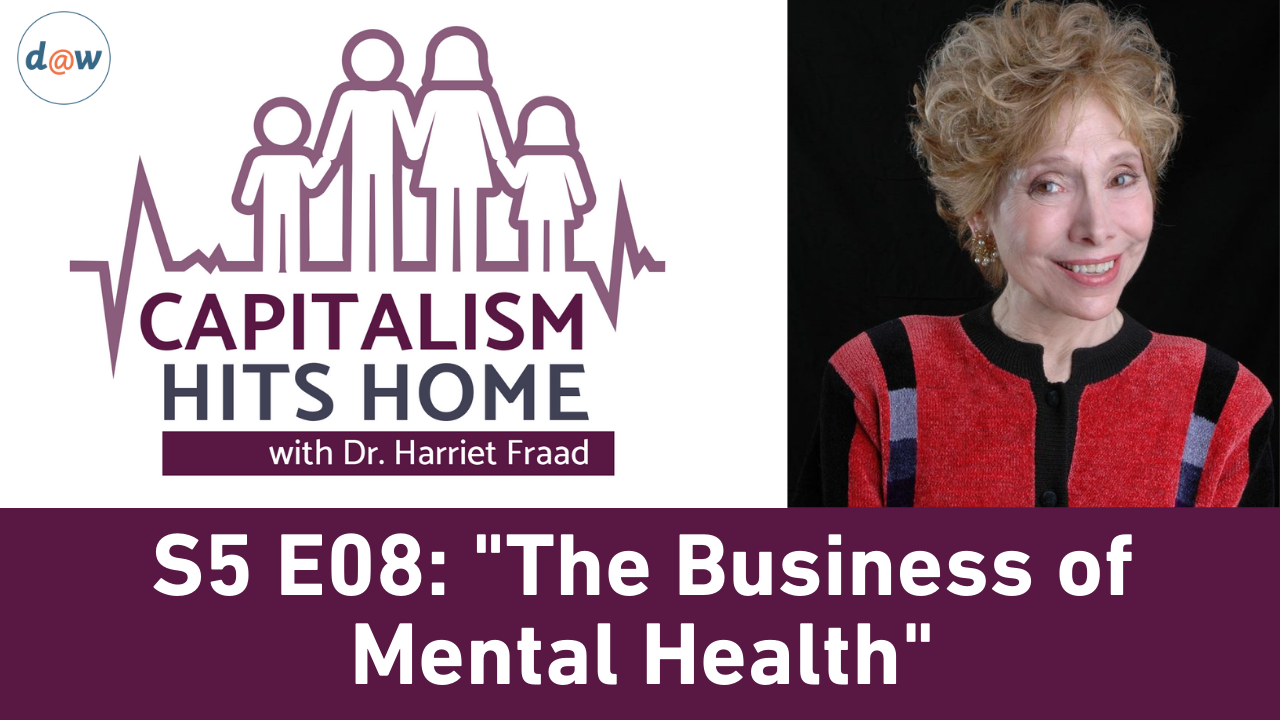 The Business of Mental Health

"One out of four American women take antidepressant drugs." In this episode, Dr. Fraad addresses how mental health is diagnosed and treated in the US. Human suffering and misery have been systematically categorized as disorders for which treatment with medication is needed and prescribed by psychiatrists. She argues that the collusion of medical doctors, insurance companies, pharmaceutical companies and hospitals driven by their quest for profits, are to blame.

Why the Women's Liberation Movement Fractured

During its inception, the Women’s Liberation Movement was rooted in anti-capitalist and anti-racist ideals, pushing for equality for all. Today, however, feminism tends to focus mainly on gender equality. In this episode of Capitalism Hits Home, Dr. Fraad discusses how that fracture happened and the deliberate forces behind it. Now more than ever we need an intersectional and collaborative approach to our social movements, with involvement from everyone. 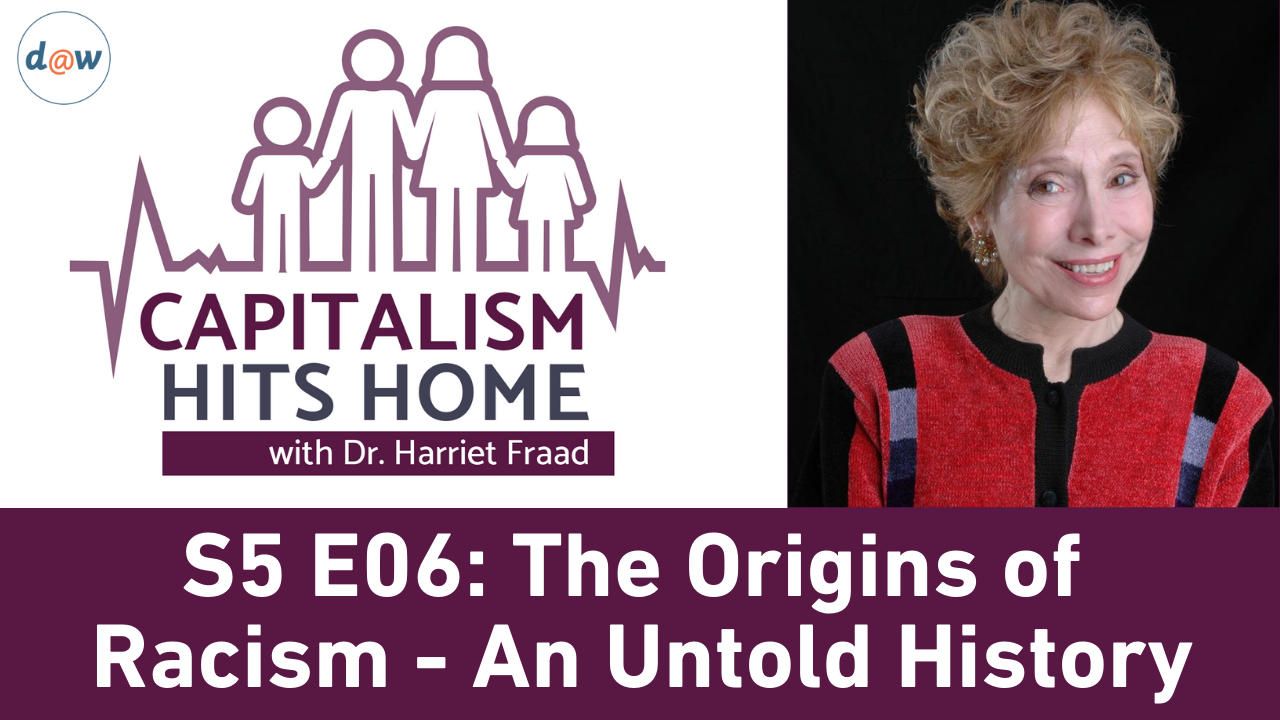 The Origins of Racism - An Untold History

Our nation's racism was a deliberate policy developed in response to rebellions in the 1600s when white indentured servants, free black men and women and enslaved black people rose up together against their exploitation. In this episode of Capitalism Hits Home, Dr. Fraad shares the story of this hugely important, yet often untaught, historical moment and its implications today.

In this episode of Capitalism Hits Home, Dr. Fraad brings a Marxian class analysis to a highly controversial topic: sex work. Though illegal in the United States, sex work is all around—from brothels and sex trafficking to the sugar industry and communes. Fraad traces a brief history of sexuality and exploitation from antiquated marital expectations and slavery to the choices women make today to be single, not have children, or find a sugar daddy to fund higher education and stay independent. When looked at through a class analysis, it becomes clear that the issue of morality need not be focused on the work itself, but rather, on the level of exploitation the sex worker endures. 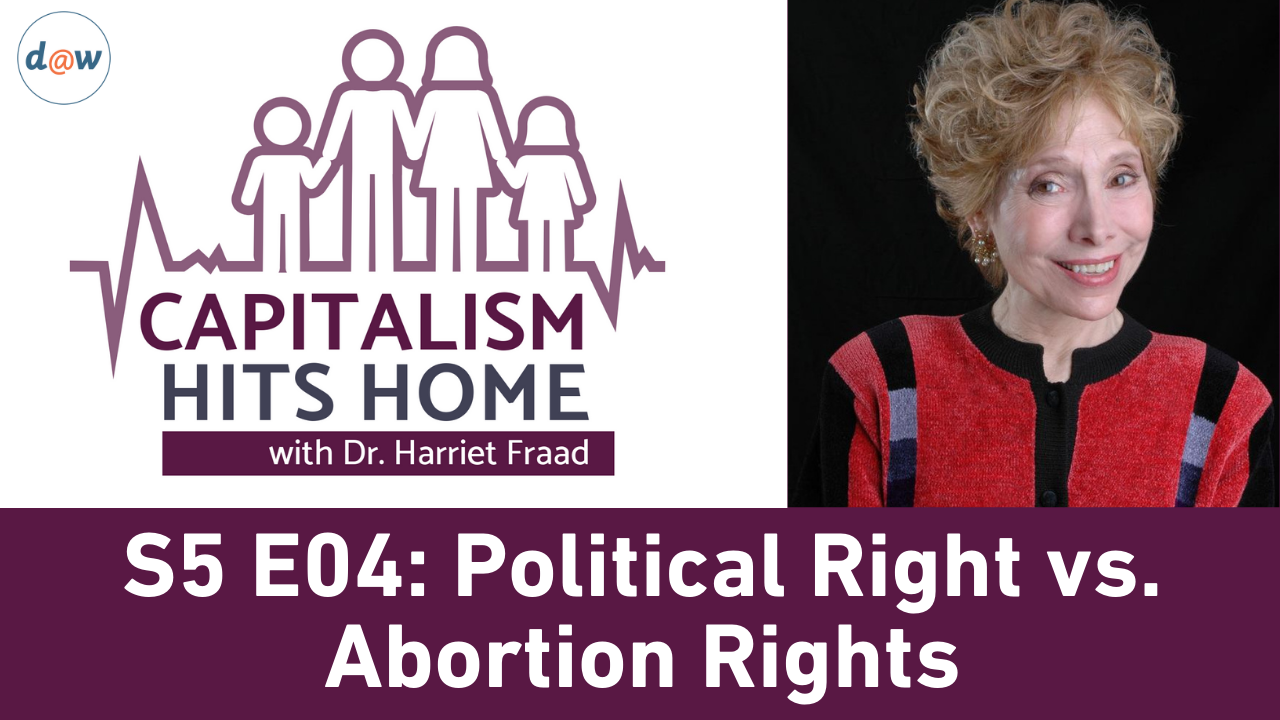 Control of women's reproduction is a common weapon in the hands of the Right Wing. In the episode of Capitalism Hits Home, Dr. Harriet Fraad breaks down the fight for reproductive rights by looking at abortion access and forced sterilization. These issues are fundamentally about class and control: forcing women to have unwanted pregnancies, denying immigrants and minorities the right to reproduce, keeping women out of the labor force and reliant on men, and dividing the masses so organization and unity is impossible.

Declining living standards, joblessness and pronounced inequality are leaving Americans feeling disconnected, helpless and depressed. In this episode of Capitalism Hits Home, Dr. Fraad talks about the 3 Ds - depression, dissociation and denial - Americans are resorting to as coping strategies for their stark decline in health and living standards. Fraad offers examples of more productive and beneficial ways to cope and heal. 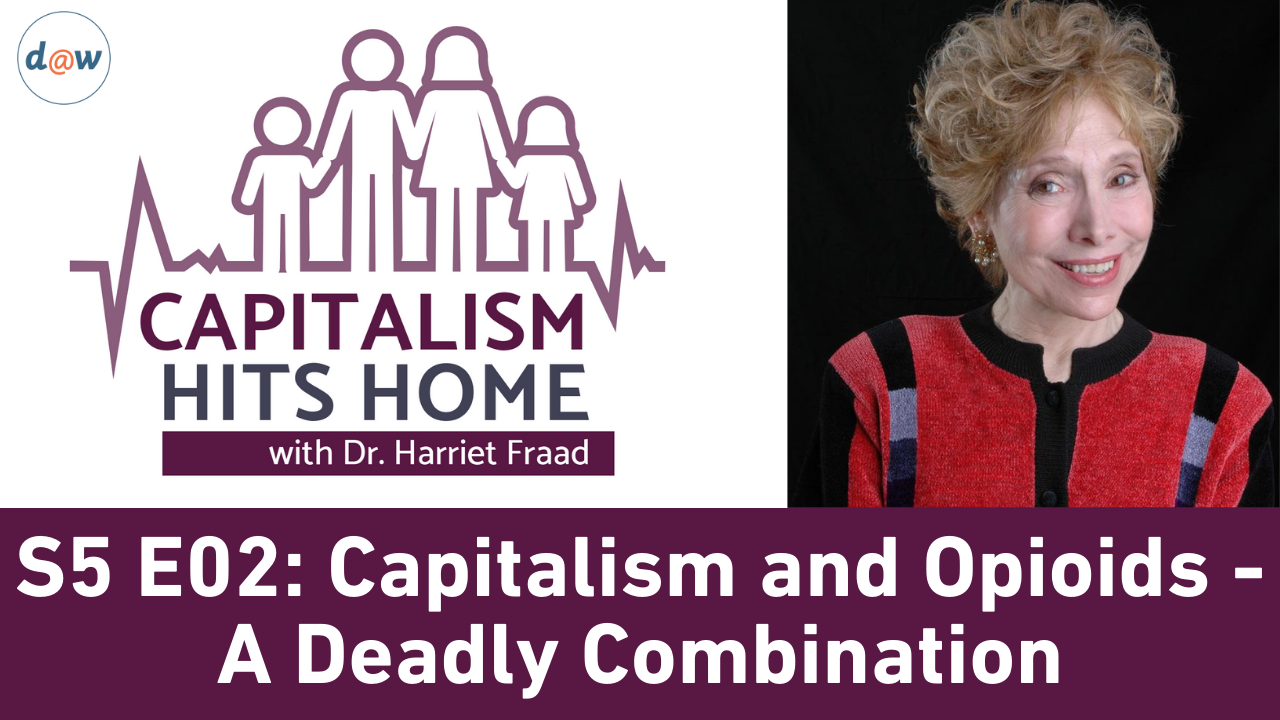 Capitalism and Opioids - A Deadly Combination

In this episode of Capitalism Hits Home, Dr. Fraad continues an ongoing critique of the for-profit health care system in the US and examines some of its deadly effects. Overdose numbers are far higher than in any other rich country and could have been avoided if it weren’t for the collusion between drug companies, pharmacies, doctors, hospitals, and insurance companies. Dr. Fraad looks at what other countries have done to mitigate the effects of their own drug epidemics, and calls for a more humane and just approach to addiction and treatment in the US, if only capitalism could get out of the way.

In this episode of Capitalism Hits Home, Dr. Fraad explores identity politics by looking into the many facets of her own identity. 99% of us share an identity as exploited, oppressed people. We have different experiences and extents of exploitation. How can we honor our identities while remaining unified as a human race? Can we reclaim identity politics to include a human identity that connects everyone in order to create a safer, freer, and more inclusive world?