Pandemic Capitalism: A View From Asia 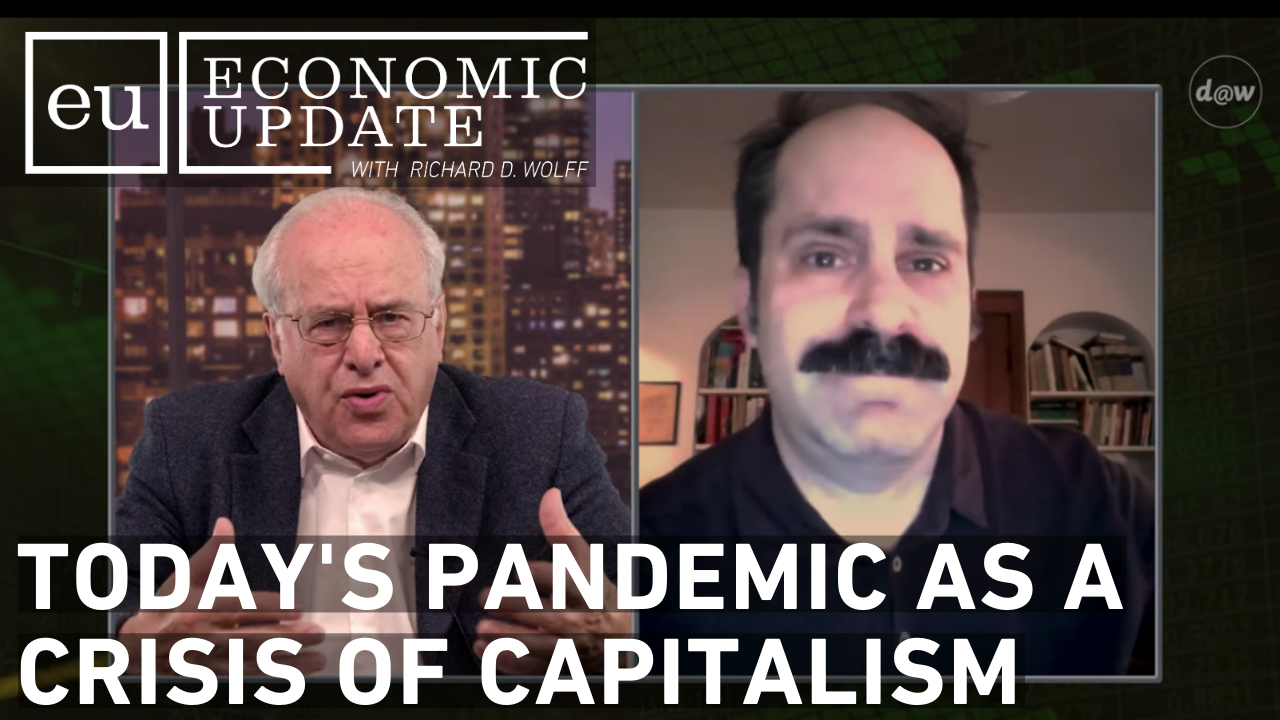 Today's Pandemic as a Crisis of Capitalism

Throughout capitalism's history, the big topic in economics was how far government should intervene in the economy. Conservatives wanted minimum intervention while liberals and socialists wanted much more. In fact, government intervention mostly aimed at saving, protecting, supporting capitalism. The genuinely "great debate" could and should have been about the strengths and weaknesses of capitalism versus those of a real alternative system, socialism. 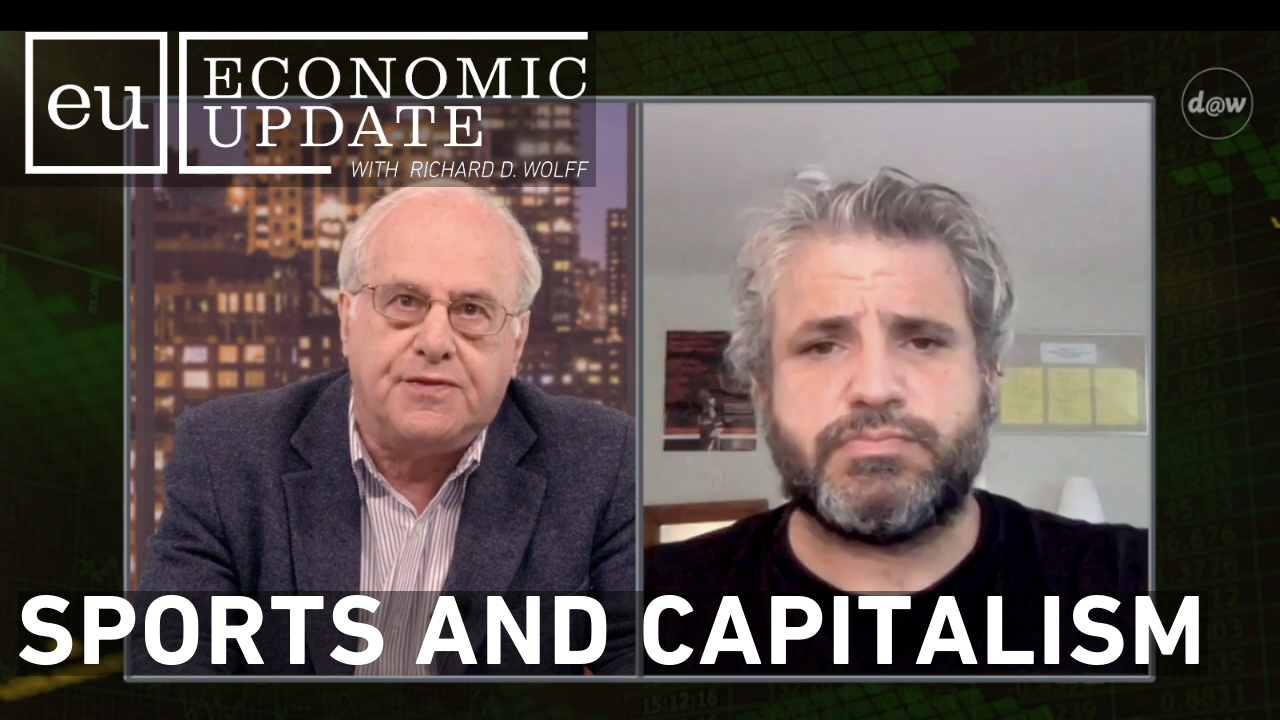 On this week's show, Prof. Wolff presents updates on false "trade-off" between illness and economy, going from normal to extraordinary injustice, hypocritical scapegoating of foreigners instead of facing domestic public health and economic failures, and lastly, the tragic neglect of education during the pandemic and economic crash. On the second half of the show, Prof. Wolff is joined by Nation magazine sports editor Dave Zirin.

On this week's show, Prof. Wolff presents updates on "zombie" companies and their rapid growth in the US, The Federal Reserve "stress tests" expose risks, and weaknesses of major US banks. On the second half of the show, Prof. Wolff is joined by Greek economist, academic, philosopher and politician, Yanis Varoufakis on DiEM25, Europe's new internationalist left. 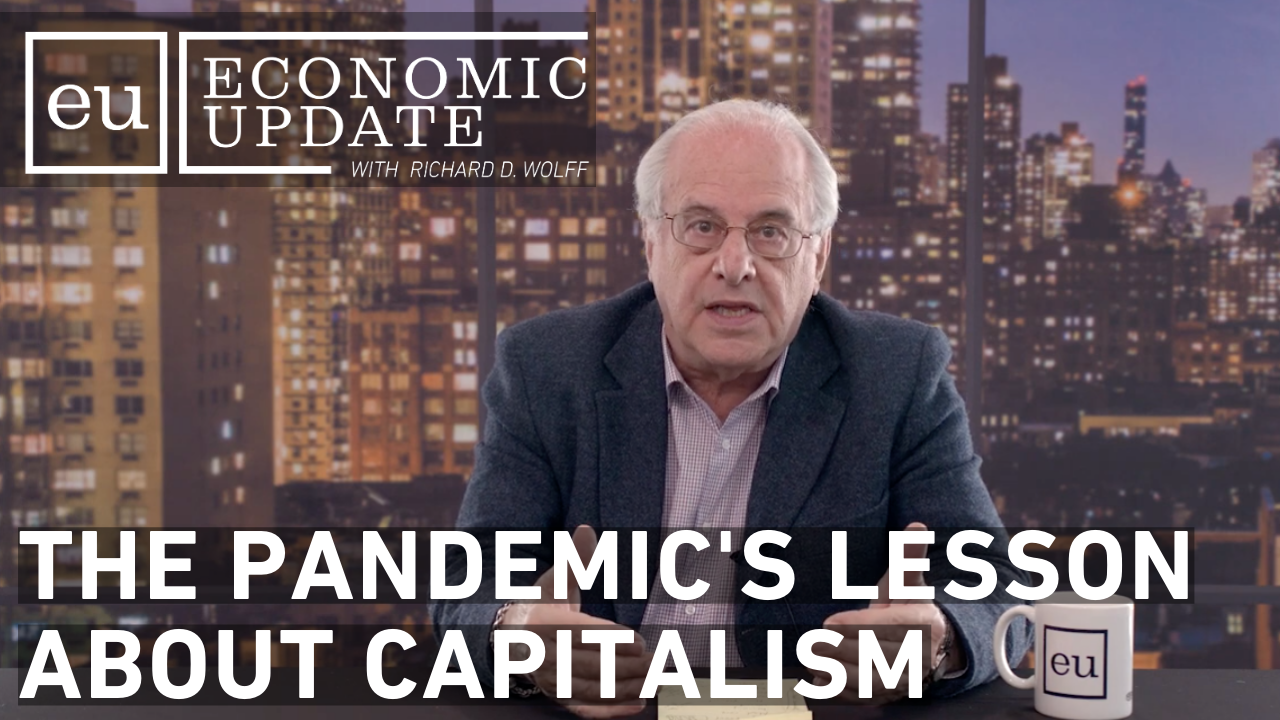 The Pandemic's Lesson About Capitalism

On this week's show, Prof. Wolff argues that preparing and coping with the Corona pandemic was inadequate: medical supplies were seriously deficient. It simply was not profitable for firms to produce or stockpile the supplies. Neo-liberal governments were complicit with private profit capitalists rather than compensating for their inadequacies. The lesson: many basic social needs are needed, like public health. We cannot, need not, and should not rely on capitalists to meet them. Alternatives are available. 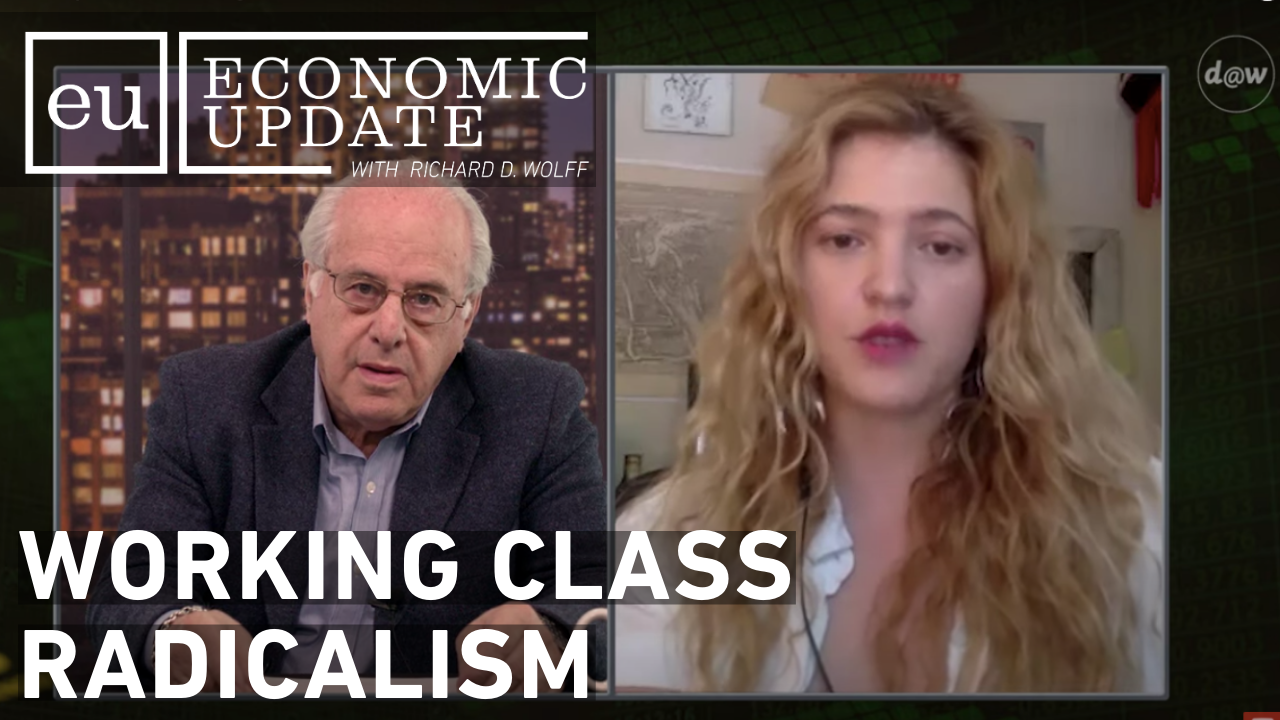 On this week's show, Prof. Wolff presents updates on why the US record on COVID-19 so much worse than most others'; corporation buys Trump; US billionaires got much richer during pandemic while 42 million workers lost their jobs; sharp rise to 66,433 homeless in LA. The second part of the show features an interview with creative activist and journalist, Eleanor Goldfield on her new film "Hard Road of Hope" on working class radicalism. 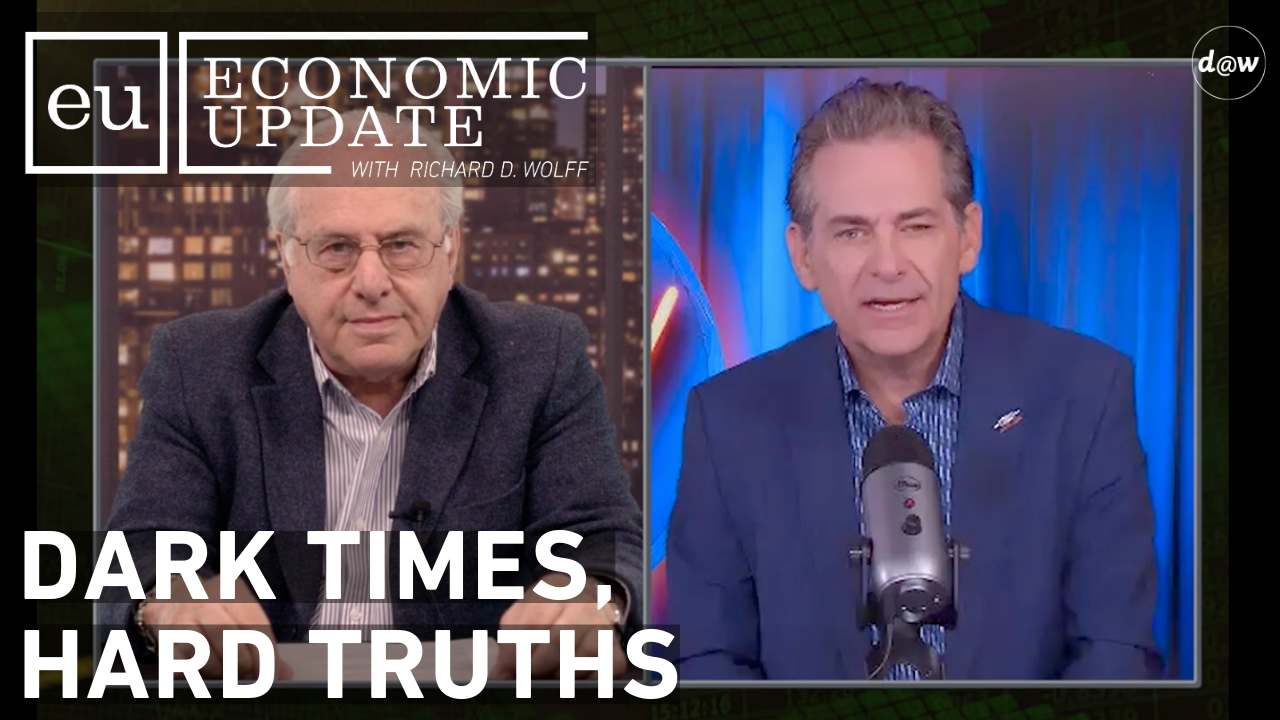 On this week's show, Prof. Wolff presents updates on mismanaging COVID-19 and US system's crash; reactions to economic decline; sharing gains of firms profiting from the virus; the mistake of "dominating;" mass joblessness = class war. The second half of the show features an interview with comedian and podcast host Jimmy Dore on today's crises and roles of GOP and Democrats.

On this week's show, Prof. Wolff explores what a socialist response to COVID-19 would have looked like. The US has 5% of the world's population but 30% of the world's COVID-19 deaths. US capitalism did poorly against the virus. Today's program explores how socialism could and would prepare for and respond to COVID-19 differently. We include both the logic of socialism's different policies and examples of socialist-influenced policies in other countries.

On this week's show, Prof. Wolff presents updates on how pandemic and capitalism are combining to worsen social divides in the US. Special guest Cornel West joins the show to talk about (1) how pandemic + economic crash are affecting US society and (2) the prospects for social change.

2020 May Day Protests and Demands

A special program: interview with Kali Akuno, leader of Cooperation Jackson in Mississippi. As a leader of national May Day actions, he discusses their size, diversity, motivations and goals (including planned monthly national actions). He analyzes organizational challenges and prospects. Finally, he explains why he believes this May Day was a major strengthening of the US left.

On this week's show, Prof. Wolff criticizes unemployment - as a specifically capitalist irrationality - and advocates "re-employment" as a far better policy. Gov't jobs and worker-coop development are key means for re-employment. Very socially necessary jobs are detailed that further encourage re-employment, instead of unemployment.


From May Day 1886 to 2020, workers wage long, hard struggles to reform capitalism. From the fight for an 8-hour workday to the fight for a safe, Corona-free workplace now. Employers block and delay reforms, and try to undo them once won. They use what capitalism gives them: dominant power, incentive (profit), and means (profits). If we change the system from capitalist to worker-coop, workers alone democratically make and secure reforms. Employers, the constant enemy of reform, vanish as a separate group dominating society.

Today’s episode features an analysis (part 1) of how, why capitalism - especially in US - failed to prepare for or cope with a virus thereby enabling it to trigger another crash of capitalism (third this century: dot.com in 2000, sub-prime mortgage in 2008). In part 2, Prof. Wolff provides an analysis of how to respond to crash better than the US government by emphasizing re-employment in millions of new jobs rather than unemployment, emphasizing worker-co-ops, etc.

The Psychological Aspects of Today's Crises

Today’s episode features an analysis of the social divisions working to undermine the solidarity needed to fight both the coronavirus and the potentially resulting economic crash as well as how the inconsistent, out-of-touch and non-empathetic U.S. leadership is leaving millions of Americans with nowhere to turn as they increasingly feel society falling apart around them. Prof. Wolff discusses the psychological factors worsening this existing crisis, such as widespread loneliness and a sense of powerlessness, with Tess Fraad-Wolff, a psychotherapist practicing privately in New York City for the last decade, in an effort to better understand and more appropriately respond to the psychological aspects in today's crises we all face.

Corona and Our Mental Health

The coronavirus's threat to physical health is clear. Far less well known are the virus's serious impacts on mental health (loneliness, depression, feelings of isolation, anxiety) worsened by the total failure of private and government leaders to anticipate, prepare for, or cope with the pandemic. With Dr. Harriet Fraad we explore the psychological costs of the pandemic and some ways we can better cope with them.

#MeToo and Corona: System is Key

This program focuses on how the capitalist economic system plays crucial roles in the #MeToo examples of Weinstein and Cosby and also in the failed response to the Corona virus crisis. The organization of capitalist enterprises - power and wealth concentrated at the top in a tiny minority - invites and enables sexual harassment and abuse by people positioned like Weinstein and Cosby. A profit-driven medical-industrial complex did not invest in preparing for the virus and a profit-subservient gov't failed to mobilize private and public resources to test for, contain, and overcome the disease.

Comedy and Tragedy of Capitalism

Updates on capitalism's failures exposed by the Coronavirus; Sanders and the re-entry of socialism into US politics; US social mobility goes down; and Macron evades democracy to try to force pension cuts (alias "reform") onto French people. Interview Lee Camp on his comedy and his critique of capitalism.

On this week's episode of EU, Prof. Wolff presents updates on Vancouver, BC, taxing its richest; JP Morgan Chase recognizes climate change threat and market's failure to cope; ways money shapes US politics today; why US women's soccer gender discrimination lawsuit helps all soccer players vs profit-driven soccer federation. The second half of the show features an interview with psychotherapist Tess Fraad-Wolff on why our jobs get us depressed and what to do about it.

This week on Economic Update, Professor Wolff responds to a criticism aimed at how d@w focuses too much on the transition from capitalist firms to worker co-op firms with too little attention paid to the larger social changes needed to move towards a worker-owned economy and thusly, beyond capitalism. Professor Wolf answers this criticism by discussing the broader social changes necessary to sustain a worker co-op based economy including the economic tools our government could use to sustain an economy-wide sharing of profits and resources as deemed necessary by the people participating in, working and creating in, the industries they as employees could and would control.

Socialism and Left Unity in the US

Updates on Trump's 2019 $1 trillion plus deficit, burden of poor countries' debt, Amsterdam forgives young peoples' debts, "strong man" governments' fund-raising strategy, and gross failures of Trump/GOP's 2017 tax cut. Interview Karen Ranucci (Center for Critical Thought) and Rob Robinson (Left Forum) on their programs and their collaboration to serve the rising US interests in socialism and building a movement for transition.

This week’s episode of Economic Update features an introductory discussion by Professor Wolff on capitalism's systematically uneven economic development. From Marx's original criticism of capitalism for producing and reproducing unevenness to the many historical examples, Prof. Wolff argues that there are indeed heavy social costs which flow from capitalism's uneven development. Those costs then become bases for arguing the need to move beyond capitalism.

This week on Economic Update, Professor Wolff discusses how the "unemployment rate" is an inadequate measure of the U.S. economy’s well-being along with the decline of the “real” value of the minimum wage in the U.S., the multiple failures and flaws of markets and how corporations as less economically efficient than worker co-ops.

This week on Economic Update, Professor Wolff delivers updates on France's successful mass uprisings (Yellow Vests in 2019; mass union strikes in 2020) that forced the French government to back down on changes workers opposed, how endless wars impose huge debts, and how the Catholic Church uses U.S. bankruptcy law to prevent the church's assets from being used to compensate victims of sexual assault.

Updates on sale of coop craft brewery, US medical costs highest in world, and the "overcoming poverty" defense of capitalism's inequality and instability. Interview Laura Flanders on independent media.

Three major criticisms of Economic Update are considered: (1) that we don't praise capitalism for reducing world poverty, (2) that we don't admit that "socialism has never worked anywhere," and (3) that no inventor of a new product or technique who starts a business will ever accept that employees in such a business are equal partners with the inventor, originator of the business. Today's program answers these criticisms, refuting their arguments systematically.

Capitalism & the Family: Myth Vs. Reality

Updates on Job Quality Index and its US decline, the French activism against President Macron's effort to cut pensions, Gartman Letter urges investors to sell stocks in face of Trump's policies deteriorating the economy, Obamas purchase $11.5 million Martha's Vineyard mansion, and Kansas City cuts public transport fares to zero. Interview with Dr Harriet Fraad on myth vs reality of US capitalism and the family.

Other Seasons of Economic Update